THE good Samaritan who has offered to pay for your physiotherapy is the same man who mugged you in the first place, it was claimed last night.

Police said the Samaritan, who has been applauded for checking you into the hospital, matches the description of the man seen brutally assaulting you, taking all your money and leaving you for dead.

The Samaritan last night dismissed the accusations, and repeated his claim that you were attacked by a gang of well-dressed Americans.

"He walks up to this bloke, all friendly, looks as though he's giving him directions. Then all of sudden he lashes out, punching him in the face and pushing him to the ground.

"Then he starts kicking him repeatedly in the stomach and battering him over the head with a big book. It was brutal."

Mr Malley added: "He then checks to see if anyone's watching before nicking the bloke's wallet and his house keys. Then he gets out his mobile and phones for an ambulance. Yeah, it was definitely the same guy."

Meanwhile the Archbishop of Canterbury, Dr Rowan Williams, last night urged the government abandon its plan to shove the Duke of Westminster through the eye of a needle.

Dr Williams added: "One could say that the British economy is like the pregnant virgin, in the very real sense that she's obviously been fucked but no-one's owning up to it. I thank you." 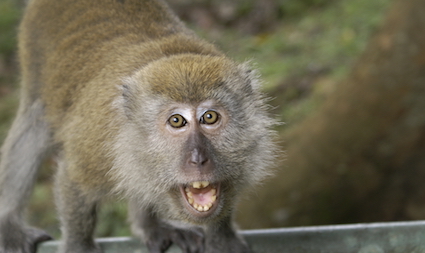 MONKEYS controlled much of eastern Asia last night after launching a series of swift and ruthless coups d’etat.

The rebellion began in China when three monkeys turned on their trainer and beat him with his own stick. Within hours monkeys across the continent were seizing control through a combination of airborne faeces and badly driven tanks.

Police stations in Indonesia and southern Thailand were last night in monkey hands, while a troop of Sri Lankan spider monkeys has taken over the state broadcaster and another controls the country’s railway network.

The rebellion is being directed by a highly intelligent two-year old Indian macaque, already dubbed ‘Chico the monkey Hitler’.

In Singapore a local police chief returned to work after lunch to find eight monkeys jumping all over his desk. He tried to coax them by making friendly noises and offering them peanuts. Two hours later he appeared cowering in a window with a gun to his head.

Monkey expert Dr Tom Logan, said: “Monkeys are sociable creatures who spend their days playing, foraging for berries, and grooming each other. But don’t fuck with them because they will shoot you.”

Indian ambassador Rajeev Chandra held up a large photo of a police car covered in monkeys, adding: “They tried driving it but one of them set off the siren and they all scattered, before slowly coming back and trying again.

“Eventually they are going to get the hang of it.”