BRITONS are gearing up to paying no attention whatsoever to large bowls of nuts.

Several thousand tonnes of Brazil nuts, pecans, almonds and hazelnuts have made their way into UK homes over the past week, to be ignored in the traditional yuletide manner.

Nut purchaser Janet Fisher, 42 from Harpenden said: “It is a family custom to buy eight kilos of nuts, place them in the centre of the coffee table in a  strange wooden contraption that resembles a Medieval torture instrument, then spend the festive period pretending they don’t exist.

“We both embrace and shun the nut.”

Fisher’s husband Derek said: “Every so often somebody will glance furtively in the direction of the nuts, think about eating one, but decide to have some Pringles instead. In February, Janet will notice than one of the walnuts has a bit of blue fuzz on it and throw the lot in the bin.

“You can recycle your Christmas tree, yet not your nuts. I believe it is something the council should look into.

“One year we bought a sack of artificial nuts, but somehow they are just not the same.” 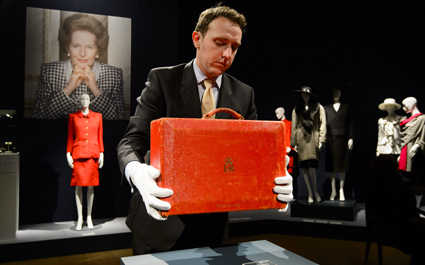 THE RED box which Margaret Thatcher’s immortal demonic soul was tricked into entering has sold at auction for £242,500.

The battered red despatch box, sealed with mystic runes drawn in animal blood, can be heard howling if an ear is put close to the white-hot lock.

Auctioneer Julian Cook said: “Thatcher’s soul was trapped within the box when it left her physical body, out of fear that it would roam the earthly plane until it found a new host organism.

“Lured in with an old bottle of free school milk, its incandescent rage will burn for all eternity.”

The box is believed to have been sold to a Chinese hedge fund, attracting ire among Conservatives who believe it should have been secured for the nation with Lottery funding.

Tory MP Susan Traherne said: “How wonderful it would be to take your children to see the demonic force on show at the V&A.

“Also we could always break the seals and set it free if the UK was ever in danger of a left-wing government again.”