Britain's right to incompetence under threat

THE UK economy could collapse by the end of the day, after a man resigned for making a mistake.

The BBC tendered the resignation of its director general for fucking up, setting a precedent that could almost instantly destroy Britain’s fragile economy.

Nikki Hollis, chief analyst at Donnelly-McPartlin, said: “The right to fuck up is one of Britain’s cornerstones. If the country had a constitution, ‘We should all be allowed to fuck up sometimes’ would be the top thing.

“To not allow George Entwistle to simply be extra nice to everyone until they forgave him, blame his mistake on everyone else or just have a couple of days off sick until it all blew over, that sends a very dangerous signal.

“Britain has never been one of those countries where everything works properly.”

Office worker Stephen Malley said: “I’ve fucked up four times this morning and I haven’t even turned my computer on yet. This sort of thing was always fine but now I’m worried I’ll have to ‘step aside’.

“I couldn’t care less about Newsnight, which is only ever watched by a small audience of half-asleep, half-drunk people. But this decision offends me.”

She said: “Suddenly work has become like a computer game where you only get one life. And that’s not the sort of computer game I like to play at work.” 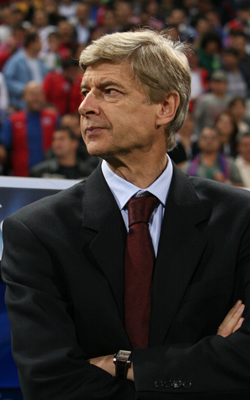 ARSENE Wenger is now a full-blown addict to Arsenal’s chronic inablity to win, it has emerged.

The Arsenal manager said that he first began to relish the feeling of raging exasperation when the Gunners went 4-0 up against Newcastle in 2011, only for Newcastle to pull the game back to 4-4 in the second half.

Wenger said: “At first, the emotions of that game felt negative – but as the second half went on, it was as if I was savouring the exquisite tang of a perfect vinaigrette á la moutarde.

“This acrid sensation in my belly, my loins, I could hardly contain myself. Ah, such plaisir!”

Since then, Wenger has dedicated his footballing genius to tactics that will ensure his team collapses like a souffle time and again.

He has combed Europe for the perfect combination of weak-kneed underachievers who can deliver the galling failure he craves.

Footballologist Wayne Hayes said: “When Van Persie achieved the sort of goalscoring consistency that might have seen Arsenal win something, anything, Wenger dropped hints to the player that he might be happier at a bigger club such as Manchester United.

“And when players such as Diaby and Jack Wilshere showed promise, Wenger would sneak into the kit room and butter the studs on their boots to ensure they slipped and suffered longterm injuries.

Wenger said that while he may look like he is suffering agonies on the touchline, he is actually experiencing a rare form of extreme pleasure: “It is for that reason I wear that long coat.

“When your team is losing, fans do not like to look down at their manager and see that he is in the throes of sexual arousal.”