LONDON’S tube drivers have launched their latest strike threat, claiming they are being picked off one by one by a family of voracious cannibals living in the underground system.

The union representing the men who get paid more than you to repeatedly press a button that stops and starts the train are demanding quadruple pay, 20 days’ extra holiday and biannual good quality hampers with expensive cheese as recompense for the peril.

They claim that despite repeated warning Transport for London has allowed the cannibal family to ‘run riot’.

An Aslef spokesman said: “As any Londoner knows, a family of flesh-eating troglodytes descended from labourers trapped by tunnel collapses during the original excavations haunts the subterranean network, preying on the unwary and tube drivers. But mainly tube drivers.

“Their clan leader, a wild-bearded individual known as Gorn, is seven feet tall, covered in lesions and carries a sharpened shovel that is perfect for decapitating our members. He communicates with his depraved family via fox-like yelps.

“The alpha female of the group, Targ, was injured by a train and may be dying, driving Gorn insane with vengeful blood-thirst.

If the drivers’ demands are not met, Londoners could face strikes on most days ending with the suffix ‘day’ up to and including that special moment in April when all Britain will come together for the wedding of two very incredible young people on whose shoulders our entire destiny now rests.

Teacher Tom Logan said: “Strike action could prevent me from attending the large celebratory gathering planned at my sisters’ house during which we will toast the royal couple, play patriotic board games and talk to her neighbours.

Mosley in bid to protect lovers of buttock pain 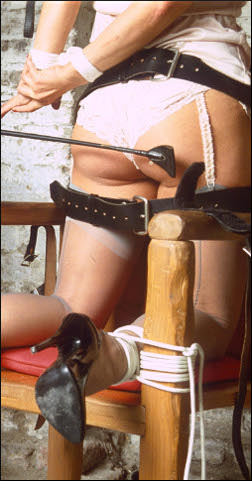 MAX Mosley has launched a bid to
protect people who love it when their bare bottoms are alive with
delicious agony.

Mosley wants the European Court of Human rights to rule that newspapers have to ask your permission before telling their readers you need to be being spanked like a bastard by fake German prozzies.

This would then allow the delighted victim to take out an injunction, inevitably granted by a judge who has forgotten more about having his backside reduced to a pulp than you will ever know.

The son of British fascist leader Sir Oswald said lax privacy laws meant senior professionals could no longer enjoy ferocious buttock violence without worrying that the details may end up in a newspaper that could be purchased easily by their wives.

He added: “As the studded paddle makes heavenly contact with my shaved, milky white-bottom and the glorious pain sends more blood pumping into my already pulsating erection I have often thought to myself, ‘this really is none of my wife’s business’.”

Mosley, former head of international motorsport’s governing body when he was not handcuffed to a commode, won a landmark court case against the News of the World after it revealed absolutely nothing about Nazis.

According to the tabloid, Mosley met with a group of sex workers, one of whom was dressed in stripey pyjamas that looked exactly nothing like the uniform of a concentration camp inmate, while another affected a fake German accent and behaved in a cruel and authoritarian manner in a way that made it perfectly clear she was not meant to be in the SS.

The woman who was obviously not a Nazi then checked Mr Mosley for lice using a method completely different to the way concentration camp inmates were checked for lice by their whip-carrying, leather-capped SS overlords.

But critics warn that Mosley’s plan would make it easier for politicians and big businesses to stop you finding out exactly how evil they are and how they actively want to ruin your life.

Media lawyer, Bill McKay, said: “We could have new privacy laws that will leave us all at the mercy of total shits, or you could maybe just watch Lark Rise to Candleford instead of cheating on your wife with a gang of arse-pummelling whores who were definitely not pretending to be Himmler.”