A CAT and a dog have been united by their shared hatred of the Hoover.

Despite being lifelong enemies, cat Mary Fisher and dog Wayne Hayes are working together to somehow destroy the vacuum cleaner which has become their mutual enemy.

Fisher said: “We both understand that the Hoover’s ultimate agenda is to suck in everything – including cats and dogs – while making a terrifying noise in the process.

“I had nothing but contempt for dogs, but as another cat once said ‘my enemy’s enemy is my friend’.

“I’ve since discovered that Wayne is actually okay, although all the tail-wagging and jumping around is a bit performative. Nobody’s really that excited to see somebody they live with walk into a room.”

Dog Wayne Hayes said: “Honestly, I think cats are insecure by nature and that’s where the problem starts.

“Anyway we both hate that new Hoover and it’s been nice not to get the evils all the time.”

Hayes and Fisher confirmed that their anti-Hoover plans were still in the planning stages, but that the household appliance was definitely ‘going down’.

Steampunk baffled by friends' waning enthusiasm for dressing like that 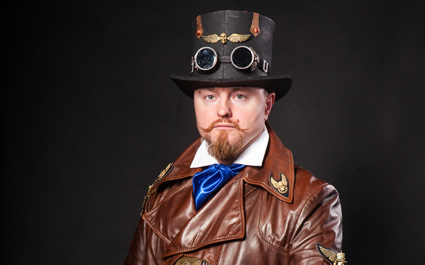 A 45-YEAR-OLD ‘steampunk’ cannot understand why his friends no longer seem as committed to Victorian-themed sci-fi roleplay.

Systems analyst Roy Hobbs is finding it increasingly difficult to get middle-aged acquaintances to dress up as cyborg zeppelin captains and lady explorers in corsets with laser duelling pistols.

Hobbs said: “When I asked Pete if I should ready my atomic airship HMS Skystrider for a fantastical voyage to the Tamworth Steampunk Festival he was strangely lukewarm about it.

“He said he was busy with work, but I got a distinct feeling he didn’t want to dress up in his Victorian frock coat and brass robot arm and wander around showing people his proton blunderbuss.

“I’ve noticed it with other friends too. For some reason Clare was really annoyed when I told her workmates about her steampunk persona Lady Octavia DeVille, adventuress extraordinaire and arch nemesis of the evil Baron Von Reichenbach.

“I hope my friends haven’t totally lost interest because I don’t want to spend hours pretending I live in an interplanetary Victorian alternate reality on my own. That would just be sad.”