'Charity begins at home' and other self-serving proverbs for twats

WANT to live a selfish twat’s life and looking for some homespun wisdom to support it? These little sayings should help:

Perfect for every occasion. Disagree with foreign aid? Couldn’t give a f**k about the homeless? Would rather keep a quid than pop it in the box of a woman collecting for dogs? You’ve got a catch-all excuse. Charity is you having all your money for you.

‘Rome wasn’t built in a day’

True, but you’re not asking for Rome. You’re asking for flat-pack furniture to be put together and instead it’s still in its box against the wall six months in. It’s not Rome, it’s a Ravaror day-bed and a Kallax shelving unit and it would take two hours.

‘A problem shared is a problem halved’

Usually said by a boss who’s dumped their problem in your bloody lap and left it for you to sort out. It’s halved for them. It’s an entirely new and very unwelcome problem for you.

‘I’m on my way’, your twat mate texts as she steps into the shower. ‘Nearly there’, she texts as she gets on the train. ‘Better late than never’, she chuckles as she arrives an hour late. Technically yes. Actually by this point you hate her.

‘You can’t make an omelette without breaking eggs’

F**ked something up? Use this. Available for workmen who’ve smashed into your gatepost while reversing out, employers who don’t give a shit that your new hours bugger up your childcare, or politicians arguing for new, shit policies. The omelette is what they want and the eggs are what you want.

‘All work and no play makes Jack a dull boy’

Quoted by that dick in every office who wastes all day on Fantasy Football or whatever. Their colleagues would much prefer a dull boy who pulled their weight and got on with the job, instead of someone who pisses about.

‘The customer is always right’

Beloved of every arrogant customer demanding bullshit of beleaguered shop workers. In fact the customer is rarely right. The customer is, in actuality, a complete pain in the arse making the lives of poor bastards working long hours for low wages a misery.

Brexit finally overseen by man of the people 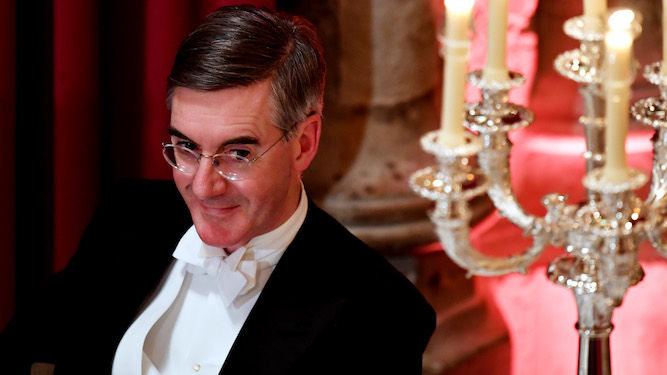 THE British public is relieved that straight-talking man of the people Jacob Rees-Mogg is delivering the people’s Brexit they voted for.

After years of mismanagement by overqualified Theresa May and policy wonk Boris Johnson, the people of Britain are overjoyed that Brexit is in the hands of someone who can relate to the struggles of the common man.

Donna Sheridan of Sheffield said: “It was feeling like Brexit only served multi-millionaire Old Etonian hedge-fund owners who didn’t give a toss about the man on the street. Thank God for Jacob Rees-Mogg, their polar opposite.

“There’s an MP who understands truckers, farmers, low-income families and all those Brexit hits hardest. A man you could have a pint of heavy and a fag with outside a town centre Wetherspoons.”

Digger operator Wayne Hayes agreed: “My vote was always anti-establishment, and who’s more anti-establishment than the Jake? He’s an outsider like I am, though in his case it’s not because of his criminal record.

“He’s a ground-level guy. He’ll spot all the opportunities those fancy nose-in-the-air economists missed. And all the rewards will go to places like Doncaster that he holds so close to his heart.

“I wonder if he reads the Daily Sport like I do? Probably. He’s one of us.”