Following a DWP ‘Golden Ticket’ sting operation, the 96-year-old was filmed dancing, singing and showing no signs of the unspecified illness that had supposedly confined him to bed for 20 years.

Benefits investigator Roy Hobbs said: “The suspect, walking unaided, then accompanied his grandson to a nearby factory to collect further handouts of everlasting gobstoppers.

“Our officer, who was disguised as an eccentric recluse, arrested him on the spot. Charlie’s parents have been imprisoned for allowing their son to take unauthorised holidays during term time.

“Charlie has been taken into care and the factory, together with its indentured staff of illegal immigrants, has been handed over to rich children who can be trusted to run it responsibly.”

Salmond has worn same tie every day for seven years 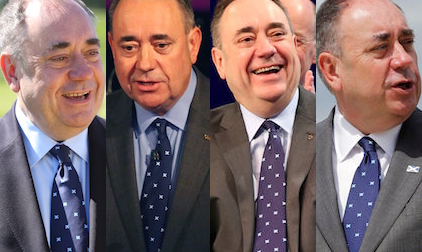 ALEX Salmond has been wearing a tie covered in tiny Scottish flags for almost seven years, it has emerged.

The superstitious SNP leader wears the tie 24 hours a day and refuses to have it cleaned, claiming it could ‘dilute his powerful Scottish essence’.

Salmond was given the garment by an admirer in 2007 and immediately declared, ‘this is it, this is the tie’.

She added: “It’s just manky. We’ll have to use pliers to get it off him. If you straighten it out you could use it as a pool cue.”