GLOUCESTERSHIRE’S ‘cheese rollers’ have defied a ban to show the world they are still drunken inbred maniacs.

The annual event, during which hundreds of people risk their lives by chasing £12.99 worth of cheese over a cliff, has been banned by those who do not understand the ways of the country.

But locals, keen that they continue to be perceived by the outside world as the collective product of shit-covered, cider-fuelled rutting between a shed full of degenerate siblings, just did it anyway.

Gloucestershire councillor Roy Hobbs said: “There is a recent trend in the media of portraying people from the West Country as being sober, welcoming and aspirational.

“But the cheese rolling helps to remind outsiders this is a region where life is cheap and demented, and that they’d be better off staying where they belong, among their own species.”

He added: “Now get off my property before I set my wives on you.”

Organisers say this year’s event went smoothly, with the only fatality being Roy Hobbs’s cousin, who was a bit of an idiot anyway.

Winner Stephen Malley said: “I can’t feel anything below the round thing that separates me head from me shoulders .” 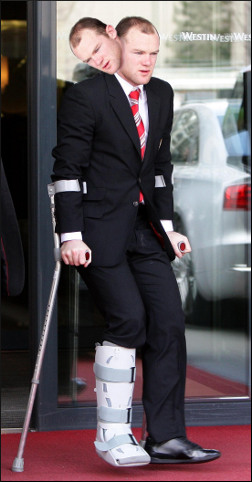 FABIO Capello has dropped 29 players from his provisional World Cup
squad in favour of a side comprised entirely of mutant Wayne Rooneys.

The England Coach is hoping that untested cloning technology can propel his side to victory after the final friendly, which moved ‘unnamed Japanese defender’ to the top of England’s goal scoring table.

Capello said: “Some of the mutants have come out a bit wonky and one of them keeps biting the heads off of physios.

“In fairness, that could well be the original Wayne, but nobody’s been able to get close enough to check him for a belly button.”

The new-look England will line up in a 0-0-10 formation, with the Rooneys slowly advancing in a straight line. The eleventh Rooney, an early attempt described as looking like a sixteen stone erection with a furious expression on what can loosely be called its face, will play in goal.

Capello said fears over exhaustion due to the increased altitude in South Africa will therefore be avoided when the opposing players run out of the stadium in unbridled terror after 30 seconds.

He added:”We have had trouble getting some of the Rooneys to push the ball into the net, especially Rooney14, who has just the one eye in his rectum, but we’re asking FIFA if we can toss a lump of raw meat behind the goal to guide them in.”

England’s scientists have also engineered a bucket full of metatarsals and hamstrings to help maintain the squad, although the main fear is that a Rooney could get loose and wreak havoc in the delicate South African ecosystem.

Professor Henry Brubaker, of the Institute for Studies, said: “You really don’t want to see what three Rooneys can do to a herd of wildebeest or an old folk’s home.

“And if one of them crossbreeds with a hippo, it would probably be an improvement.”