A CHILD spent so long fucking about putting on his shoes that his parents aged by seven years, it has emerged.

Three-year-old Tom Booker was told that the family would be leaving the house in ten minutes but was still filling the washing machine with Lego 22 minutes later.

Tom’s mother Emma said: “I asked Tom to fetch his shoes and he disappeared for ages before returning with three plastic dinosaurs and the toilet brush.

“I asked him again and he lay down on the floor and began shrieking as if I was trying to murder him rather than take him to soft play like he’d been begging me to do literally an hour before.

“Eventually I went and got the shoes for him. He put them on his hands and banged them together for ages and then stared dolefully at me and whispered ‘mummy do it’ over and over again until I got creeped out and gave in.

“Although it was really only a few minutes, the whole process seemed to take the best part of a decade and weirdly I now look noticeably older. It could be stress or maybe he is a mutant with time-warping superpowers.”

Booker’s father John added: “And his shoes fasten with velcro which should be quick, for fuck’s sake.” 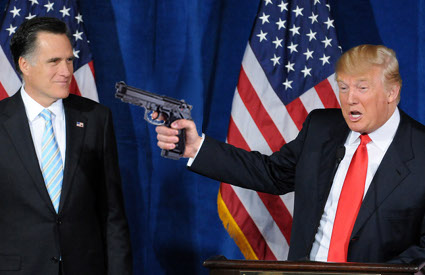 With Trump making the kind of decisions only a man hell-bent on mass destruction would make and Theresa May refusing to rule out large US companies taking over the NHS, people are gradually coming round to the idea of replacing them with rational people.

US voter Bill McKay said: “I voted for Trump because he said he was going to ‘Make America Great Again’.

“In hindsight I maybe should have looked a bit deeper than a meaningless slogan and actually looked at the fact he’s completely off his rocker as then I might have thought twice.

“And if I’d even known who the hell Steve Bannon was I’d have made sure to vote for some actual humans.”

“Although I’m putting this down to the fact I was recently kicked in the head by a donkey at a seaside resort.”