THOUSANDS of children across the UK have told their parents to buy them a bionic cat, or upgrade their existing cat to bionic status.

Interest has surged after Oscar, a cat from Surrey, was given two bionic feet in a ground-breaking operation, leading to spoiled little shits all over the country demanding radical surgery to their family pets.

Tom Logan, a father of two from Hatfield, said: “Maisie now feels that our cat, Bangles, is essentially worthless.

“She said it was a boring, rubbish cat that didn’t do anything and that we shouldn’t be surprised if she tried to flush it down the toilet or bury it alive.

“I pointed out that if we gave Bangles some bionic feet she wouldn’t be able to move around as easily and that bionic feet are very much a last resort for cats that have disagreed with combine harvesters.

Martin Bishop, a father of three from Finsbury Park, said: “I’ve persuaded Dylan, my seven year old, that we should start by cutting the feet off of a gerbil and then maybe, when he’s a little bit older, we can think about mutilating some larger animals.

“He says he would eventually like to cut the legs off a dog and replace them with springs. But he would also make sure that it wore a safety helmet in case it banged its head on the ceiling. He’s such a sensitive little chap.”

Logan added: “I’ve found this Bulgarian website that seems to do bionic pets. I’m still not sure though. The last thing you want is a four-wheeled cat with dodgy eastern European brakes careering up and down the hall when you’re trying to read a book.” 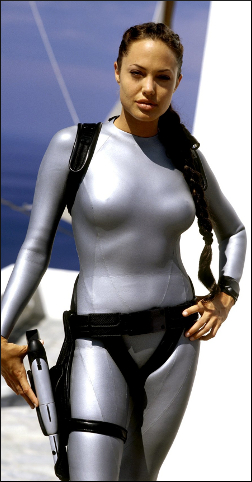 THE people of Belgium faked the destruction of their country in a bid to meet Angelina Jolie, it has emerged.

In a government-orchestrated effort to lure the Mr and Mrs Smith star, Belgians jammed the UN switchboard with frantic phone calls claiming they were experiencing a humanitarian crisis resulting from a combined earthquake, volcano eruption and asteroid strike, with a touch of civil war.

Angelina Jolie is a national obsession in Belgium, alongside waffles and vaguely menacing medieval-style processions.

One anonymous caller said: “It’s quite hot here at the moment what with the volcano so probably best if she doesn’t wear too many clothes. Her Tomb Raider get up would be ideal.

“Failing that just something light and summery that complements her skin tone.”

Another said: “No waffles left. Eating children. Send Angie. In her pants.”

However the UN Goodwill Ambassador was too busy filming Wanted II: Very Fast Cars and People’s Heads Exploding to respond to the pretend emergency.

Meanwhile a UN spokesman has strongly dissuaded other nations from deliberately trying to attract Ms Jolie.

He said: “The Portuguese actually blew up Lisbon and then flooded what was left. We knew they’d done it on purpose so, no Angelina. Now they feel really stupid.”

Belgian Prime Minister, Yves Leterme, said: “We couldn’t help ourselves. She is like Mother Theresa as imagined by the writers of American Pie.”