Children To Be Taught Why Women Are Out Of Their Minds

SCHOOLCHILDREN across England are to get compulsory lessons on why women are insane.

Ministers want to make sex and relationship lessons compulsory so future generations of boys do not waste half their lives trying to work out what the hell that was all about.

A spokesman said: "Most of the early classes will focus on teaching boys how to let it all wash over them.

"Meanwhile the girls will be taught the importance of establishing confidence and stability in a relationship before suddenly changing their minds."

Lessons on the biology of sex will also be overhauled with new diagrams showing the male body as a digestive system attached to a disappointingly small penis.

Public Demands More Celebrities To Be Concerned About 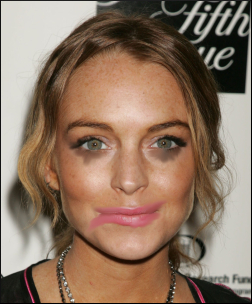 ITV was swamped with phone calls last night as viewers across Britain demanded fresh celebrities to worry about.

As friends of Kerry Katona insisted the star was in good health, thousands of concerned viewers demanded another look at her when she has remembered to take her pills at the right time.

"I have a feeling this whole lesbian thing is just a cry for help, so ideally I'd like to see her with her make-up all smeared and some dribble in the corner of her mouth."

She added: "I'd also like to see an interview with Katie Holmes where she seems all frightened and nervous and is constantly looking over her shoulder."

Carol Thompson, from Bath, said: "That Matt Lucas seems emotionally fragile at the moment. Perhaps they could slip something into his tea, just to see how he copes.

"I suspect it would be too much for him and all the anguish and heartache will come flooding out. I'd take the morning off work to see that."

Thompson added: "Like everyone else, I'm extremely concerned about Amy Winehouse. I hope the nice people at ITV have the decency to put her on so I can see how she's doing.

"I'm also quite concerned about Fern Britton and I think you know why. Perhaps Philip Schofield could ask her if it's chocolate biscuits."