Christmas brought forward to tomorrow and lockdown to day after, says government

THE government has brought Christmas Day forward to tomorrow and full lockdown to first thing Wednesday, they have confirmed.

With Omicron infections skyrocketing, today has been made Christmas Eve and December 21st is Christmas Day, so the country can briefly experience festive joy before months in lockdown.

Health secretary Sajid Javid said: “We will not cancel Christmas. But we will give you the early Christmas present of giving you Christmas early.

“This is a compromise. You want Christmas and you don’t want Covid. This is the only way to achieve both so start panic-buying now.

“If you’re a sensible Tory and have your shit together you’ve probably already got everything you need. If you were planning on leaving it until Friday to do a big food shop and pick up thoughtless gifts that’s on you.

“Look, we’ve seen the opinion polls, we need you to have a lovely f**king Christmas whether you like it or not. We’ll claim it as a massive victory and have an ill-advised New Year’s celebration in Downing Street. Everyone wins.”

Martin Bishop of Leamington Spa said: “It’s a start, but why not move Christmas to summer when there’s less illness about permanently? If Qatar can move the World Cup why not?”

I am leaving for the Brexit in my head, says Lord Frost 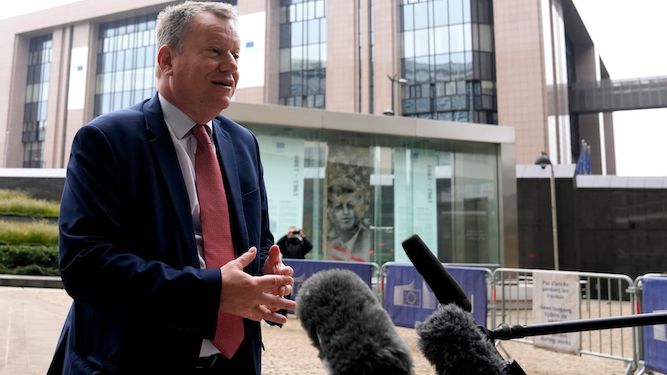 LORD Frost has resigned as Brexit minister because the reality of the job was ruining the clean, pure, eternally gratifying Brexit of his imagination.

Frost, famous for turning up to initial negotiations with nothing but a blue suit and a smile, admitted that daily meetings with the EU were spoiling his own personal mental Brexit and he could not allow it to be sullied further.

He said: “In many ways, it’s my conception of Brexit – a simple dream where Britain enjoys tax and trade advantages far beyond any country on Earth, and attains perfection – that’s carried me through.

“I have never allowed that dream to be grubbied by rival politicians, by experts, by economists or business leaders. I have kept it with me and let it guide me.

“But over recent months, having been forced to actually sit down with EU officials, I have been brought face-to-face with reality. And I don’t like it.

“Reality seems to me biased, liberal, institutionally anti-Brexit and actively hostile to my most cherished beliefs. And I will not allow these petty penny-pinchers’ dirty hands on the Brexit of my mind.

“Instead I resign and I’m taking my Brexit with me to spend long unclouded days contemplating its unreal, luminous majesty. God, it’s incredible. If only you could see it.”