THE only way to be charming and self-assured is to be a little bit drunk the whole time, it has been confirmed.

Researchers found that people who claim they have natural confidence or have worked hard to achieve self-esteem are just tipsy and therefore have fewer inhibitions about looking like an arse.

Confident person Emma Bradshaw said: “I have risen quickly through the ranks in my career, impressing managers and colleagues alike with my go-getting attitude towards making bold decisions and not being afraid to speak my mind.

“I tell people  I read a self-help book about unleashing my inner tiger, or some other bullshit, but the truth is that I have a glass of Merlot with breakfast every morning.

“Making bold decisions and speaking your mind makes you look like an absolute knob down the pub, whereas in the office I look like Erin Brockovich crossed with Elizabeth I.

“Of course, it’s a fine line between feeling confident and calling Elaine from accounts a heffer in a pinafore dress before being sick in the bin.”

Voter who liked Labour policy slapping himself around the face 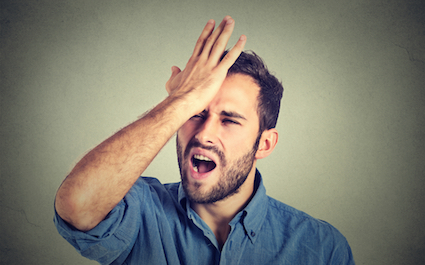 A VOTER who thought a policy in Labour’s manifesto sounded ‘attractive’ is slapping his own face repeatedly and telling himself to ‘wake up’.

Tom Logan, 38, was horrified at his own positive reaction to the abolition of tuition fees, calling it ‘levelling the playing field for talent’ before calling himself a ‘irresponsible dickhead’ moments later.

Catching himself a solid blow on the right side of his face, Logan said: “Get real, you idiot.

“You think Britain can afford handouts to every lazy millennial who fancies a three-year holiday and a gender studies degree?

“Yes, but you benefited from it. I said SHUT UP!

“These policies are promises that haven’t been costed. Like Brexit, you mean? No, that’s different. Because it’s different, that’s why.

“You’re an adult now, and you vote for the fiscally sensible party. The ones who’ve increased the national debt to record levels.”

He added: “Silence! Corbyn’s a nutter!”