A POPULAR and inspirational English teacher puts no effort into her job whatsoever, she has admitted.

Francesca Johnson, aged 25, has won pupils over by encouraging them to write whatever they want rather than stick to the curriculum, which they have mistaken for street-smart charisma rather than simple laziness.

15-year-old Wayne Hayes said: “Cheskie’s the best teacher we’ve ever had. She really lets us take the lead in our education.

“Instead of giving us written homework to complete like robots, she asks us to think about big issues and present our conclusions orally to the class while she records them on her phone. Or does something on her phone.

“We can read whatever we want, she gets us thinking about the system with her morning rants against education and inspections, and she really believes in ‘unstructured learning’. And she’s pretty.”

Johnson said: “I don’t know how they’re inspired by me. I do fuck all.

“Thing is I was exactly the same at my previous school, before quitting the day Ofsted came in, and the clever kids passed all their GCSEs anyway so whatever.”

Morrissey was never in The Smiths, say fans 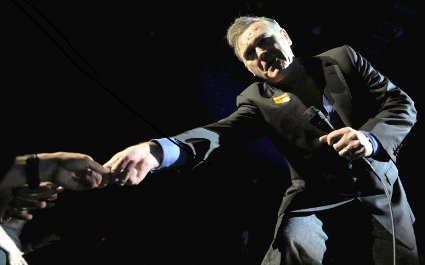 HISTORICAL revisionist Smiths fans have proved that Morrissey, long thought to be the singer and lyricist, was never actually in the band at all.

Fan Tom Booker said: “The idea that the Smiths were led by a man who claims the most Islamophobic UKIP candidate was cheated out of the leadership never stood up to scrutiny, and on examination has collapsed.

“We’ve dug into the records, and the actual lead singer was a handsome, sensitive young man who articulated the pain of disaffected adolescents in a decade of cruelty.

“‘Morrissey’, in contrast, is a grandiloquent narcissist who delights in his own provocative racism and looks like a bricklayer with a sideline as an Elvis impersonator. It’s clearly a completely different person.”

Booker added: “We don’t know what happened to the singer of the Smiths, and the band have said exactly the same.

“If only he was around today. He’d make mincemeat of this horrendous Morrissey character.”