Cornish person genuinely thinks it is some sort of a country

A WOMAN from Cornwall thinks it is a nation of some kind, it has emerged.

She said: “Kernow has its own rich Celtic heritage, including a very popular language and a professionally-designed flag. We also invented fudge and seafood restaurants and are sick of Westminster telling us what to do.

“Our proud, soon-to-be-independent nation boasts such urban powerhouses as Truro and St Austell, with an economic infrastructure based on growth industries like basket making.

“And sometimes our men wear kilts. Not sure why, but it’s good.”

Bradford’s co-worker Norman Steele said: “Obviously we thought she was joking, so I made a quip about how Cornwall should have its own currency featuring Martin Clunes in the role of Doc Martin on one side and a big pasty on the other.

“She looked at me earnestly, said ‘not a bad idea’ and made a note in her phone.”

Colleague Mary Fisher said: “I thought I’d play along with the apparent gag by saying that I was from the nation of Wiltshire, part of a proud fighting race called the Swindonians.

“Emma said that if our two races joined forces in the coming rebellion we could do a power-sharing deal.”

Cat confident owners are going to love this bird 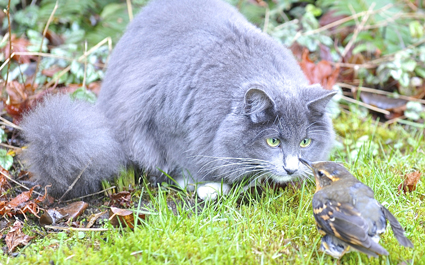 A CAT is certain that its owners will appreciate having a mauled bird brought into their house.

Long-haired cat Wayne Hayes caught the bird after his human masters were unimpressed by the voles and mice he previously dragged into the kitchen.

Hayes said: “When I brought a mouse in they were actually quite angry, but on reflection I realised that a mouse is actually a shitty present as mice don’t have much meat on them.

“Clearly they have been holding out for a bird. They’ll want to do the killing themselves, because that is the fun part.

“So I’m bringing it through the cat flap in an alive but slightly maimed condition, so that it can flap around the house crashing into things. Catching it is going to be a great test of their reflexes.

“It looks so delicious I am tempted to eat it myself, but I know my place.”