Council offices to grind to whatever is slower than a halt

STRIKE action by council workers could lead to a redefinition of the concept of movement, it emerged last night.

Unison members will be balloted over whether they should be allowed to avoid the same shit as the country’s other 28 million workers and will down whatever their equivalent of tools are if they are not told they are really, really brilliant.

Ninety-two grand a year general Secretary Dave Prentis said: “If our demands are not met, bins will continue to just sit there forever and ever while council offices will grind to whatever is slower than remaining completely and utterly motionless.

“If nothing else it could herald a new golden age for theoretical physics.”

He added: “You’ll know they are on strike because they will be wearing a big badge that reads ‘my union says I’m special’.

“After spending their allotted 20 minutes on the picket line they will then break for a three-hour encounter session on Placard Sensitivity.”

The disagreement is over pensions, with public sector workers being asked if they would actually like to contribute some money towards them.

But the arbitration experts Acas said many Unison members struggle to differentiate between employment and retirement and currently believe they are being asked to pay for going to work.

A spokesman said: “Most former employees only notice they’ve retired because they don’t spend as much time guzzling free Chardonnay in four star hotel conference rooms as they used to.

“They then get terribly frightened and demand some nice, fresh money.” 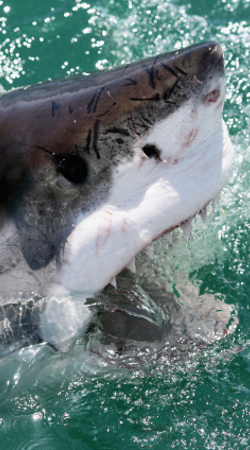 A GREAT WHITE shark escaped with cuts and bruises after straying into coastal waters full of British drunks.

The 21ft sea predator had strayed drastically from its traditional hunting grounds in the waters of warmer, more civilised countries, emerging near Newquay during a stag weekend.

Stag organiser Tom Logan said: “We were just leaving a kebab shop around midnight, with aspirations toward punching some random stranger in the eye socket, when one of the lads spotted this big thing in the sea.

“There were two massive black beady eyes just below the water level, looking at us proper funny like.

“Definitely it was asking for a kicking. So we got in the water and set about it, hitting it with Grolsch bottles and trying to pulls its fins off, because only gays have fins.

“Scottish Steve lost a leg but whatever, he was too pissed to notice.”

The stag party dragged the shark ashore, where they continued to set about it, joined by a hen party from Dundee and a shirtless man with a ‘Made in Britain’ tattoo who urinated onto its face, before it finally managed to slither back into the sea.

Marine biologist Dr Emma Bradford said: “Sharks are accustomed to humans from hot, pleasant regions without a deeply ingrained culture of hedonistic violence, which makes them extremely vulnerable in the waters and streets of the UK.

“Despite what you may have seen in Jaws, they actively avoid humans and if encountered should not be headbutted.

“Nor, I might add, are sharks in any way responsible for Jaws: The Revenge with Michael Caine and Mario Van Peebles, a sequel which triggered numerous attacks from viewers angry at having part of their life stolen by a fish.”