'Couples that 10k together, stay together' and other things twats will surely be saying soon

PHRASES like ‘OK, Boomer’ are annoying but increasingly obsolete. Twats have these aggravating little phrases ready to take their place:

‘Couples that 10k together, stay together’

Likely to be coined by a pair of Strava-addicted twats too good to spend their Saturday mornings nursing hangovers like normal people. Before long it will be printed on skintight his-and-hers running vests in Comic Sans without any irony. Call these people on their bullshit and you will be labelled a jealous hater.

Every World Cup mishap, from a misplaced pass by Harry Maguire to a maimed stadium worker or a jailed homosexual, will be greeted with this droll reply. Hearing fans sing it to the tune of Sweet Caroline will almost be as bad as FIFA’s decision to hand World Cups to Russia and an oil-rich desert.

The looming possibility of a second Scottish independence referendum needs a suitably snappy name to connect with the public, and there’s no way the country is going to get on board with the logical choice of ‘Scexit’. Instead the tabloids will settle on McBrexit, which will be the last push Scotland needs to tell the UK to f**k off.

It’s hard to make a phrase as annoying as Platty Jubes even worse, but that won’t stop the British public from trying. Come the anniversary of the long bank holiday, people will whip out the bunting and declare the date Platty Jubes Plus One. Unless the worst happens and a mourning public is forced to observe a Statty Funers.

The phrase ‘Wagatha Christie’ has done an amazing job in promoting an otherwise hard-to-follow legal battle, but when the verdict finally lands expect this slogan to emerge if the Rooneys win. So what if it ignores the difference between a civil case and not a criminal trial? The tabloids need to whip up prejudice in as few words as possible somehow.

‘Whose Tesla shall we take?’

The car brand for battery-powered twats is continuing its slow, almost silent, creep across the nation. While still in the minority, owners of Musk Wagons continues to grow. This means we’ll soon be forced to listen to simpletons use the word Tesla interchangeably with the word car. Bore off and get a scooter.

Six crap shows your f**king partner got you hooked on 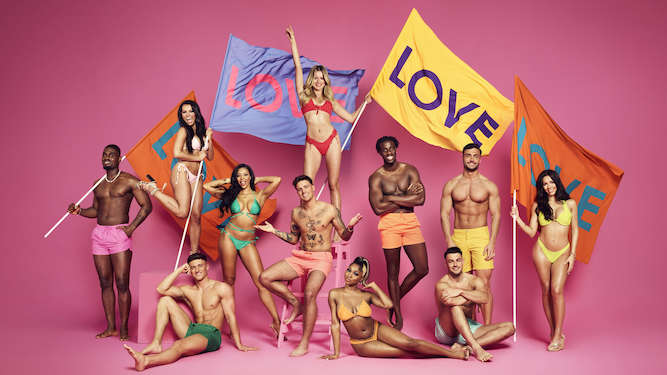 BEFORE you met your partner you had select, refined viewing tastes, until they got you obsessed with this total shit:

This American reality show set on a super yacht was unbelievable bollocks for the first 15 minutes, after which you got pathetically invested in the day-to-day lives of the crew as they turned down beds and cleaned puke out of the hot tub. Within one episode you were writing off their $15,000 tip as ‘f**king tight’.

At first you only watched Love Island in brief, ironic glimpses as you looked up from your phone. Now it’s a nightly obsession where you search for cracks in Gemma and Luca’s relationship. If you spent as much time in the gym as you did watching this exploitative crap you’d be shredded enough to go on it. You’d be dumped first, but still.

All the talk of ‘tight screws’ and ‘bent rods’ used to make you snigger until it won you over with its wholesome charm. In theory The Repair Shop is as dull as watching dust accumulate, but everyone on it is so bloody talented that you’re riveted. Except for Jay Blades, who stands around looking spectacular but appears to do f**k all.

During lockdown you got suckered into This Morning because your partner popped it on and you couldn’t be bothered to do Joe Wicks. Two years later, with no excuse, you’re still glued to Phil and Holly’s fixedly upbeat worldview. You can barely hold down a day job knowing that you could be missing a viewer winning £100,000 in tax-free cash.

‘Who wants to watch Oxbridge nerds show off how smart they are?’ you used to think. But your partner liked it, there was nothing else on and now you’re shouting your answers at the screen during Connecting Wall rounds. Your partner would admire your intellectual engagement but you’re yet to get a single answer correct. Not even in the Missing Vowels round, which is piss-easy.

You dodged it the first time but your new boyfriend’s doing a rewatch. You’re locked into 60-odd hours of high-end drama, purely because you enjoy sex with them. You’ll think you’re free when the credits roll on the last episode, but that’s when they suggest binge watching Better Call Saul in time for the season six finale.