CONSTANTLY criticising your child’s school is a vital part of being a shit parent, it has been claimed.

Useless parents believe the best way to help their offspring is by reacting hysterically to anything the school does and regularly threatening to kick teachers’ heads in.

Mother-of-two Emma Bradford said: “I found out the teachers at my son Callum’s primary school had been making the children race each other for their own sick amusement.

“They dressed the kiddies up in little shorts and made it hard for them to run by making them carry an egg on a spoon. As well as the risk of paedophiles, the eggs are full of cholesterol.

“Naturally the first thing I did was call the local paper.

“I went round to see the headmaster but he’s still off work after I punched him for confiscating Callum’s phone, just because his friends wanted to hear all the ringtones during a lesson.”

Shit parents expressed further concerns including pupils being forced to do unpaid work and putting on weight due to being made to sit down.

Parent Tom Logan said: “The teachers keep telling my kids all these terrifying stories about witches, transvestite wolves and this ravenous caterpillar that absolutely will not stop, like the fucking Terminator or something.” 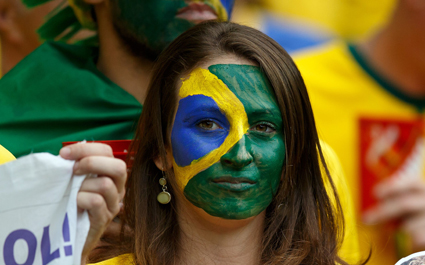 MILLIONS of gallons of face paint washed off in the wake of Brazil’s humiliating defeat have turned the nation’s rivers turquoise.

Ecologist Roy Hobbs said: “The rainforest risks becoming a lurid, barren hell, all because of over-reaction to a ball game.

“Wildlife uses colour as a signal. For example, the skin tone of a poisonous tree frog that normally warns raptors not to eat it has been changed to a more tempting stripy green.

“Meanwhile the infertile capybara female’s dyed pink rump invites passing males to exhaust themselves having pointless sex with her.”

Emergency legislation means that it is now illegal for Brazilians to remove any remaining face paint, even if they have to attend a high-stakes business meeting.

In a related incident, discarded David Luis and Marcello wigs were reported to have formed a Guernsey-sized floating island at the mouth of the River Plate.