FORMER users of the super-speed that can make you chew your legs off have spoken out to say that, on balance, it is probably best avoided.

Crystal Meth is a cocktail of twice-baked amphetamine, moose tranquiliser, crack cocaine and ground-up shellac gramophone records that is up to four billion times more addictive than popping the bubbles on a Jiffy Bag.

Former addicts, speaking at the ‘Crystal Meth: Is It For Me?’ exhibition at Earl’s Court, said the drug was less cool than many believe, especially when you are injecting it into your one remaining eye with a sharpened bellows.

Carl Howes, from Portsmouth, said: “I was running a double glazing company when I was offered my first hit from Terry, my regional sales manager, at the Christmas party.

“Within 72 hours I’d traded in my BMW 5 series for a stolen Waitrose trolley and had become a Nosferatu-like creature of the night, living in skips and shagging frozen chickens until my cock bled.

Former florist Lucy Durston discovered crystal meth when she ordered some chinos from a clothing catalogue but was sent a kilo of the drug instead, due to a warehouse mix-up.

She said: “I loved the way I could stay up for six weeks on the trot with the deafening sound of Belgian techno constantly ringing around the inside of my skull.

“But then I blacked out, woke up naked, covered in cat blood and with three of my toes missing, to discover that I’d burned down my house and all the houses on my street while screaming obscenities in Gaelic.

“All things considered, you might want to join a squash club instead.” 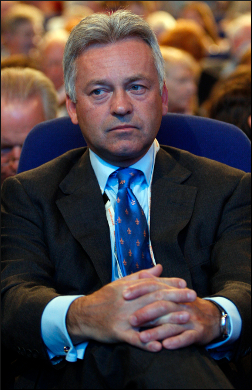 MEMBERS of Parliament are still dicks, it emerged last night.

Despite the ferocious public anger over the parliamentary expenses system and a pledge by MPs to reform it, new research suggests that many of them remain very punchable indeed.

Alan Duncan, the Tory shadow leader of the House, who has been at the forefront of his party's apologies for the expenses scandal, yesterday confirmed that he did not mean any of it and that he wants more money to buy nice things without being shouted at.

Speaking to the man who vandalised his garden, Mr Duncan warned that unless MPs were treated like Little Lord Fauntleroy, the House of Commons would soon not be able to attract money grubbing ex-oil traders like him.

He said: "I am now forced to bring in a packed lunch. It's basically a small Tupperware box with a Visa card in it.

"I then have to use this card to buy food at some French restaurant – French! – and then I have to carry a very heavy receipt all the way back to my office.

"Sometimes I have to wait days before that receipt is reimbursed, during which time I come dangerously close to dipping into the huge amounts of money I made selling oil to Pakistan during the Gulf War.

"Now you may say that bringing a packed lunch is no great hardship, but what you have to realise is that politics needs people like me, otherwise how will vast oil companies have their interests represented in parliament?"

Mr Duncan added: "I am being treated like a shit. Like an oily, greasy, grasping, selfish little shit."