Daily Mail hacks into the voices in my head, says Dacre

THE Daily Mail has only ever hacked into the voices inside Paul Dacre’s head, the paper’s editor confirmed yesterday.

Dacre denied the Daily Mail hacked mobile phones insisting he filled his newspaper by listening into conversations between at least two of his personalities.

Dacre told the Commons culture, media and sport committee: “There’s ‘Wayne’, who’s a builder with two children who thinks naked breasts are wonderful, natural things and then there is ‘Bill’, who lives with his mother and her cats and does not like breasts or homosexuals.

“Sometimes they will be joined by ‘Margaret’ who is a retired school teacher who is sick and tired of queuing behind Pakistanis at the chemist. Margaret and I often play Yahtzee together.

When asked if his paper would ever consider using illegal means to pursue stories, Dacre asked the committee if they were referring to the 2006 Racial and Religious Hatred Act.

He said: “Nevertheless I do suspect Melanie Phillips found out about the 500,000-student all-gay mega-university in Carlisle by getting her owl to stick an electric straw up Vince Cable’s nose while he was napping.”

Dacre also revealed that the computers and mobiles of Daily Mail journalists are not connected to anything and the paper stopped having any communication with the outside world in 1978.

He added: “Last week I did see Jan Moir take off her shoe, dial some invisible numbers and then hold it to her ear and scream abuse at Graham Norton. She went on for 45 minutes.”

Are you scared yet? 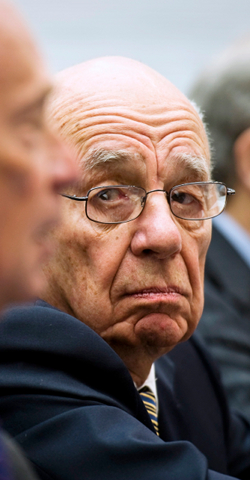 BRITAIN spent last night staring at the ceiling with its duvet clutched tightly under its chin.

People across the country are now waiting in the dark for black clad villains – who are probably also policeman – to use a master key to enter their houses and inject them with one of those drugs that makes it look as if you have had a heart attack.

As the phone scandal thingy claimed its first life, police said nothing would be suspicious ever again, while Rupert Murdoch prepared to give a parliamentary committee a thin smile and a sinister, knowing look.

A spokesman for the News Corp chairman said:  “It’s totally like a film, isn’t it?”

Ordinary members of the public agreed wholeheartedly and said it would be even better if it was made into a high-quality drama series by the wonderfully talented people at 20th Century Fox.

Tom Logan, from Finsbury Park, said : “I love all of their films and TV shows. Everything else in the world is utter rubbish. And thank goodness the Guardian doesn’t do telly. Can you imagine how awful that would be?”

John Whittingdale, the Tory chairman of the Commons culture, media and sport committee which will grill Mr Murdoch later today, said: “First of all I will apologise to him, then I’ll sing him a song and then I’m going  to ask him a series of probing questions about how he became so splendid.”

But experts stressed that even if Murdoch has started killing people it does not explain why the country’s two most senior police officers have resigned, the prime minister is probably next and Murdoch looks set to lose control of his empire, thereby suggesting there is an even darker and more powerful force controlling all of this.

Julian Cook, professor of conspiracies so crazy they must be real at Roehampton University, said: “At the risk of sounding like Prince Philip, I suspect it’s the Chinese guy from Indiana Jones and the Temple of Doom.”

Meanwhile, police will today begin pretending to investigate the death of former News the World reporter Sean Hoare while setting fire to all of his stuff as Neil Wallis and Glenn Mulcaire erase his mobile phone messages after getting the go ahead from Ian Edmondson who will have been given tacit approval by Andy Coulson who will at no point have discussed it with Rebekah Brooks or James Murdoch who in turn would not waste Rupert Murdoch’s time with such trivial matters because he is too busy having meetings with his Chinese puppet masters.

Guardian journalist Nick Davies has taken to wearing a titanium breast plate and a concrete hat.