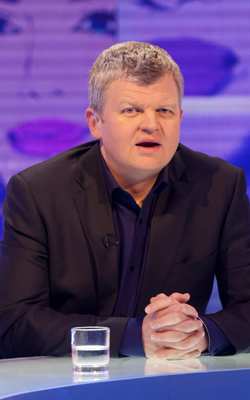 Hovercars, jetpacks and teleportation may seem like science fiction  but they’re not as complicated as you might think. We’ve already managed to teleport a tiny photon, in no time we’ll move up to huge lumps of yeast and human hair. From there, it’s just a short hop to Adrian Chiles and perhaps beyond.

Most people would be mistaken for thinking that Chiles had already teleported. Indeed, I was as confused as anyone when he disappeared from BBC’s The One Show and materialised almost instantaneously on ITV’s Daybreak. The process seemed to have run smoothly, but teleportation is not as simple as it seems. For a start, the original copy must be destroyed. This raises many philosophical problems as it assumes Adrian’s memories, feelings and eyebrow­raising peccadillos are down to the way his atoms are assembled and not because he might have a soul. Personally, I wouldn’t be first into the teleporter because I’m a huge fan of Katherine Jenkins and would hate to have soundproofed my basement for no reason.

No doubt, some in the physics community rejoiced when Adrian made the leap. To the untrained eye, the new Adrian was a perfect replica. However, I’m a man of science and couldn’t help noting some subtle anomalies. For example, the new version said the word ‘lather’ almost three times more per minute. Furthermore, his thumbs were double their original size, his testicles were on the wrong side of his trousers and his shirt was unbuttoned to the waist.

This proves that there exists a quintessential ‘Essence of Adrian’, which isn’t transmutable simply by copying atoms. It’s my scientific dream to extract this essence and transport it freely around the world. One day in the future, Adrian might unexpectedly disappear from ITV and rematerialise in front row seats at Katherine Jenkins Live at Edinburgh Castle.

It all sounds so perfect, but what if this technology fell into the wrong hands? What if Adrian was rudely unappreciative of such seats and grabbed the teleporter for himself? He might enter completely random co­-ordinates and accidentally end up nipple deep in an amply sized jacuzzi in the Ritz Cartlon, New York. He would learn quickly from the hundreds of sherbert Dibdab wrappers and drained bottles of Calpol strewn around that this particular suite was being used by the band One Direction during their US tour.

He’d needto think carefully about how he’d explain his presence there to the authorities. That is, if Harry and the boys decided they didn’t find him a welcome addition to their rambunctious hot tub frolics. We couldn’t bank on how this would all play out, so it’s probably for the best that human teleportation is at least fifteen years away, by which time all of 1D will have drowned or be in diabetic coma.