‘Did I throw up in a pumpkin last night?’ asks bleary-eyed eight-year-old

AN EIGHT-YEAR-OLD has woken up in a tattered skeleton outfit surrounded by Swizzels wrappers with a vague memory of being sick in a jack-o’-lantern.

Joseph Turner admitted the last thing he can remember is shotgunning a tube of Smarties while dancing to Thriller, and that he has a terrible feeling he behaved rather badly.

He continued: “Urgh. Pretty sure that taste in back of my throat means I was mixing Haribo and Maltesers. I’ll pay for that.

“I promised myself I’d show some restraint this year, but it’s almost like I start buzzing as the bucket fills up and once I get triple-dropping the chocolate eyeballs, I’m gone.

“At some point I was definitely running in circles screaming ‘Trick or treat! Trick or treat!’ while holding a flashing, I dunno, wizard’s staff or something. I have no idea. I was basically out of my mind by that point.

“Uh-oh, there’s the pumpkin out in the garden and somebody sure filled that thing up. That is disgusting. Never again. Seriously, never again.

“What’s this in my pocket? Double Lolly. Okay, just until the shakes stop.”

Prue Leith accidentally reveals there is no God 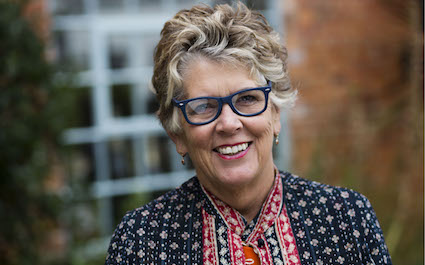 BAKE-OFF judge Prue Leith has accidentally tweeted conclusive proof that God is dead and you are going to burn in Hell forever.

The tweet, sent at 10.37am yesterday morning and swiftly deleted, included a photograph of the Judeo-Christian deity’s grave alongside the message “The Horned One has won and the universe is his! Nobody told me I would feel so emotional #GBBOfinal #kissthehoof”.

Hundreds of Bake-Off fans have hit out at the septuagenarian for ruining their enjoyment of their earthly lives by revealing that they face an eternity of torment.

Julian Cook tweeted: “Thanks Prue, I was looking forward to retirement until I found out I’d be burning in a lake of fire for untold millennia!” while Emma Bradford agreed, “why have I bothered living for the last few decades when it’s all been ruined for me??? #GBBOfinal”.

Retired headmistress Margaret Gerving summed up the thoughts of many when she tweeted: “This would never have happened on the BBC! #GBBOfinal #bringbackMary”.

Leith said: “I honestly cannot apologise enough. I just hope all the fans will enjoy what should be a wonderful last few years on this plane before it becomes the dominion of my satanic master.”