EMPTY disabled parking spaces have become almost irresistible after it emerged that most badge holders are probably lying anyway.

Researchers found some disabled badges are being used fraudulently leaving Britain free to assume that at least 96% of people who have them are evil bastards forcing you to push your trolley an extra 30 yards.

Frustrated parker Tom Logan said: “The only thing that’s stopping me parking in one of the six permanently vacant disabled spaces at Tesco is the almost superstitious fear that to do so would be make me Stevenage’s answer to Pol Pot.

“And then the rational part of my brain reminds me that half a dozen disabled drivers are unlikely to arrive within the time it takes me to get a Pepperami and a scratchcard.

“Perhaps now I can turn my fear of the disabled’s mystical powers of retribution into a liberating hatred. I’d like that.”

Mother-of-two Emma Bradford said: “I did sort of half park in one once, but that was mainly to do with the fact that I can’t park properly because I’m a woman.

“Nevertheless it didn’t stop me from having the same nightmare every night for two months where a giant bat in an electric wheelchair sucks my brains out through my neck.”

Strauss Denies England In Control Of Their Actions 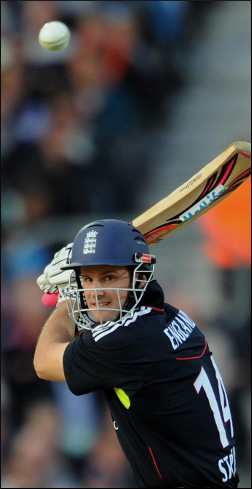 In a passionate defence of his players, the England captain insisted the team’s performance is merely a form of sporting Brownian motion with results being the application of chaos theory in action.

Strauss said: “We could no more dishonestly affect the outcome of a match than we could catch that hard red thing that flies all over the place.

“If you were to plot our intentions versus the outcomes, you would have two graphs of random, wildly flailing dots.

“And if it was us bowling, half the dots would have flown completely off the graph into a neighbouring mathematical equation and we’d have to ask it nicely to throw them back over.”

He added: “English cricket is governed by two universal constants – a chronic
inability to learn from one’s mistakes interspersed with a series of
happy accidents.

“The idea that the traditional English middle order collapse is
somehow deliberate is a bit like saying Scotland lose football matches
on purpose. Or that Noel Edmonds is being paid to be a fucker.”

Meanwhile, shadowy betting syndicates have been approached to see if they can bribe English sportsmen to win things.

The ECB, the FA and the British Athletics Association have all made it known that they have no problem with the nobility of the game being compromised in exchange for just a tad less unremitting awfulness.

Cricketologist Roy Hobbs said: “Our sportsmen have consistently proven that there’s absolutely nothing they won’t do for money – so let’s see if that could also include not being utter piss for five minutes.”