HOMEWORKERS in need of office-style conversation about TV and sport are meeting by dog waste bins.

The bins, positioned at the perfect height to lean on, are the new hangout spot for thousands of freelancers desperate to avoid work by going on about Game of Thrones for 40 minutes.

Illustrator Joanna Kramer said: “I was strolling by last week, polybag of hot excreta in hand, when I got chatting about the latest Taylor Swift video.

“It’s a great place to chill – one elbow on the bin, opening conversations by asking if Rex has been regular then moving on to what’s happening with the Kardashians.

“Now I’m swinging by at least four times a day, and the only problem is I’m suffering a shit shortage.

“I tried making fakes from wet cardboard and chocolate posset but they don’t stand up to scrutiny.”

Kramer’s cocker spaniel Herbie said: “Finally we get to hang out where all the good smells are.

“Though when I hear them going on about Geordie Shore it does turn my stomach a bit.” 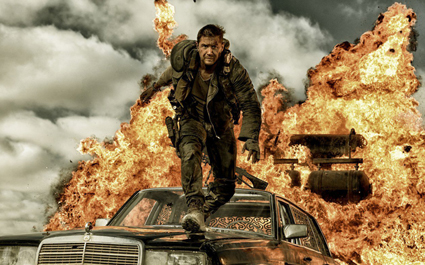 DIRECTOR George Miller has revealed that Mad Max: Fury Road was entirely ad-libbed by the cast.

The technique of unscripted improvisation, famously used in TV comedies such as The Thick of It and Curb Your Enthusiasm, has not previously been applied to films full of explosions and car crashes.

Miller said: “I’m a huge Curb fan, so I wanted to capture that same organic, hyper-realistic vibe on set of Fury Road. So I just dropped the actors in the middle of the desert with cars and weapons, and switched the camera on.”

“Tom Hardy got the ball rolling by sticking a garden trowel over his face and mumbling in this ridiculous voice about how he was a ‘blood bag’.

“Then Nicholas Hoult straps Tom to the bumper of his car and drives off at high speed. It all just snowballed from there.

“People were blowing trucks up, there were guys on stilts stabbing each other, Charlize Theron was coming out with all this mad, off-the-cuff shit about stowaway wives. One guy even had a flamethrower guitar – no clue where he got that.”

Miller added: “There’s this one scene where Tom was supposed to just gaze menacingly into the middle-distance, but then this two-headed lizard darted into shot. Quick as a flash, Tom just picks it up and stuffs it in his mouth.