MAINTAINING your Northernness can be a tricky business. Here are six worrying signs that you’re slipping into the behaviour of a soft Southerner.

An absolute no no. Once you deviate from a firm handshake with your old man, who knows where it will lead? Opening up about your feelings? Listening to classical music? Giving him a kiss?

It’s okay to accidentally glimpse a Union game when flicking channels; actually watching one is sacrilege. It’s the reserve of the public school-educated City boy. You like Rugby League, remember? They can keep Twickenham. You have Widnes, Warrington and Hull.

Admitting to liking Sushi should be, at best, a deathbed confession for anyone truly Northern. So next time you’re secretly scoffing down salmon sashimi, think of all the people you’re letting down.

The hardiest Northerners don’t even own a coat, the whole thing being an alien concept. There are exceptions, obviously, and you can wear one if the temperature drops below -4 degrees. Everything up to that, just put on a jumper, you tart.

Ever since that first pint aged 14 down your parents’ local boozer, bitter has been part of your life. Lager, still considered a ‘woman’s drink’ by some very old Northerners, is bad enough but if you’ve developed a taste for lager tops it’ll just be a pint of lemonade next.

A dead giveaway, this one. You’ve lost sight of your gruff regionality so much you’ve bought a house in the commuter belt of Surrey. Sophie is probably a nice woman – don’t get us wrong – but she’s teaching your kids to speak ‘Southern’. It’s so stressful you’ll need to soak in a long, relaxing ‘barth’.

The questions men are shit-scared of women asking 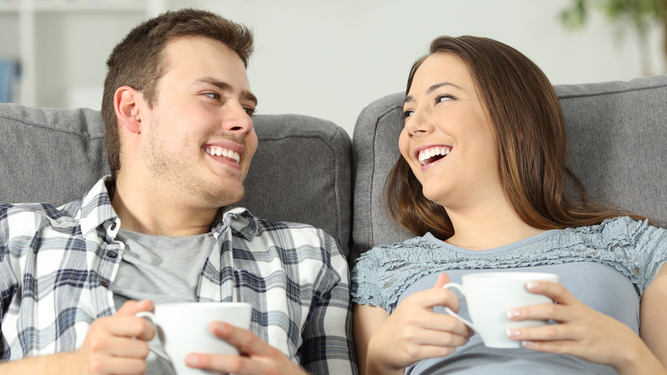 DO you want to see the man in your life go rigid with terror? Try asking him one of these simple but terrifyingly difficult questions.

Do you know what day it is today?

Of course he doesn’t, but he’ll instantly be gripped with panic that it’s your birthday or anniversary. Watch him squirm for a while before putting him out of his misery by telling him it’s the date you got the dog. Then do the whole thing again next year.

Are you still planning to decorate the bedroom?

This passive-submissive approach will have him feeling guilty and scrambling to come up with another barely plausible excuse for not having done it in the first place. Great to watch, but don’t expect it to mean he will actually f**king do it.

Do you prefer my hair up or loose?

The classic no-win situation. Whatever his reply, it’ll sound like he thinks the alternative is shit. He’ll babble and stammer a bit before blurting out ‘I think it looks nice either way’. Push him for a definitive answer if you have a sadistic streak.

Can I ask you a question?

He’ll assume this is some terrible harbinger of doom, even though he doesn’t even know what you’re about to ask. Keep him dangling, assuming the Bad Thing you are about to discuss is his fault, then ask him something utterly banal like ‘D’you think I should try making this sausage casserole off BBC Good Food?’.

What are you thinking about?

The classic terror-inducing question, because now he’ll have to pretend he was actually thinking and not vacantly staring into space. Watch him grapple to come up with something intelligent, or even romantic, to give the impression he’s very thoughtful and wasn’t just wondering if he should watch The Meg with Jason Statham.