COMPANIES are using psychometric tests to distinguish between liars and people who are too stupid to lie.

The tests use a series of questions like ‘Is hard repetitive low-paid toil your favourite thing?’ and ‘Are you passionate about being treated badly by your managers and the general public?’.

HR manager Donna Sheridan said: “If they truthfully answer ‘yes’ they’re perfect for mindless tasks in our vast, featureless warehouses, and if they’re barefaced liars we can put them in door-to-door sales to prey on the gullible and senile.

“We can find out even more about them with ridiculous abstract questions like ‘Would you rather be stuck in a lift with Enya or Megatron?’.

“If you don’t abandon the test muttering ‘this is bullshit’, you’re exactly the sort of unquestioning, humourless corporate drone who can be moulded like a golem from a lump of clay.”

She added: “Asking them to choose their favourite actor is particularly valuable. If they say ‘Him out of Death Wish’, that’s our new foyer security guard.”

Cameron’s retro Thatcherism to include Golf cabriolets and Howard Jones 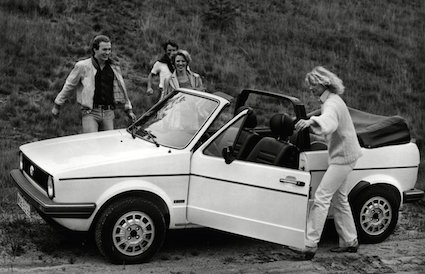 HARD-WORKING British families will be driving Golf Cabriolets and wearing white socks if the Conservatives are re-elected.

David Cameron’s pledge to bring back the ‘feel good days of Thatcherism’ will also include shoulder pads, pegged trousers and a ‘massive and concerted national effort’ to get Howard Jones to record a new album.

Cameron said: “I have dusted off my Flip USAF trenchcoat and am very much looking forward to a post-election celebration that may involve going to a restored Victoria Venue to dance around on one leg to the Thompson Twins.”

Chancellor George Osborne said restoration of the one pound note could lead to a further drop in inflation.

“Paper money is much easier to count, and far harder to throw at beggars, so people hold onto it for longer, bringing prices down. The cost of a Breville toasted sandwich maker will fall to pre-Top Gear levels.”

But Labour leader Ed Miliband attacked the Tory plans for failing to include anti-apartheid discos and ‘Joan Collins and Linda Evans having a big, sexy catfight on Dynasty’.