A 31-YEAR-MAN has expressed deep frustration at his failure to make the cursor disappear while watching a film on his laptop.

Stephen Malley found himself unable to enjoy The Conjuring because of a little black arrow mocking him from the edge of the screen.

He said: ”No matter how many times I brush the touchpad or double-click or even restart the computer, the cursor remains, like in an Edgar Allan Poe story where somebody is haunted by guilt.

“Whatever prompted whoever designed this laptop to implement a cursor that will never – fucking never – disappear?”

Hayes’s girlfriend has repeatedly told him to ignore it and concentrate on the film, but he is unable to do so.

He added: “I could of course end this nightmare by taking my own life, but I’m afraid that even in death the cursor would haunt me still, distracting me from the boundless glories of Heaven by adamantly refusing to ever fuck off.”

The cursor subsequently disappeared for a few seconds, only to resurface right in the middle of the screen. 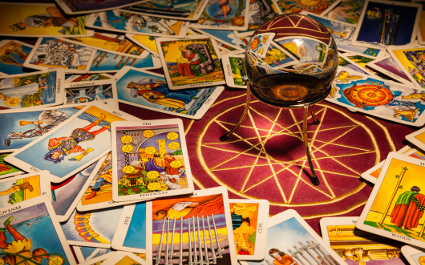 TAROT readers are only doing it to make character judgments for which they would otherwise be punched, it has emerged.

Tarot readings, supposedly offering a glimpse of the future, are instead providing a long, unwavering look at all your shortcomings and faults half-concealed by symbolism.

Self-styled mystic Francesca Johnson said: “See, the Seven of Swords here shows where you’ve tried to be cunning and trick someone, perhaps by looking at your mobile while you were in the toilet during the pub quiz, but they’ve seen through it.

“Coins represent the material world and the Six of Coins here is suggesting you could benefit from being more generous, maybe by paying your fair share of the taxi for example.

“And finally the Devil, which is the way you’ve been acting to your friends since you got together with that knobhead Ryan.”

She said: “Oddly, when Fran read her own cards the Death one came up, which she explained doesn’t mean actual death but is more about the end of one phase and the beginning of another.