Everyone curious why woman with huge boobs not overjoyed about it

THE friends and partner of a woman with 38F breasts are perplexed as to why she seems less than thrilled about her generous blessings.

Sophie Rodriguez, aged 26, is the envy of her friends and her friends’ boyfriends, but seems to regard her coveted bosoms as an inconvenience and burden.

Pal Grace Wood-Morris said: “It’s really weird. Instead of saying things like ‘My humongous tits are my best feature, I am a goddess of love’ she moans they’re so heavy they give her backache.

“I’d love to have boobs even half that size, but she never even wears anything that shows off her cleavage because apparently ‘everyone stares’. Surely that’s the point?

“I said ‘I bet your boyfriend loves them,’ and she said ‘Yeah, he never f**king leaves them alone’ as if that was in some way a bad thing. It’s mystifying. They’re wasted on her.”

Boyfriend Oli O’Connor said: “All the other girls with big tits – glamour models, Kelly Brook, those ones in boxing rings – all seem to be permanently cheerful because of their lavish assets. Not Sophie.

“It’s a shame she can’t appreciate her magnificent bounty as the gift it is and giggle coquettishly at her good fortune. Perhaps while playing with a beach ball and in a bikini.” 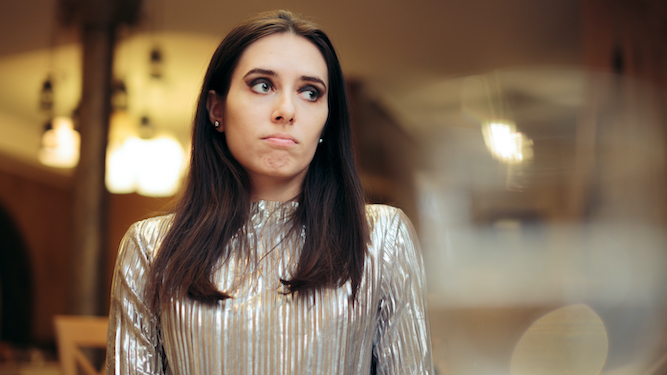 A WOMAN’S decision to attend a house party has provided watertight evidence as to why she should only ever drink alone.

Helen Archer had been persuaded into attending the gathering, having forgotten over the course of the pandemic that something described as ‘a fun piss-up with cool people’ is always uniformly shit.

Archer said: “I walked in on a desperate scene. My brain didn’t want to accept that the whole thing would just be these nine people sat in a circle in the living room with the big light on.

“I ended up cornered by this smug man who wanked on for ages about how he loves getting his milk delivered to the door in glass bottles. I was swigging neat vodka, but, somehow, he kept me deadly sober.

“What eventually saved me was intercepting an absolutely plastered woman going to the toilet to be sick. She told me she was fine but I insisted on going with her and locked us in the bathroom for an hour.

“Everyone acted like I was a saint, but they hadn’t clocked the host’s boyfriend getting out his guitar. Holding this random girl’s hair back was my only ticket out of there.

“From now on I’ll be drinking by myself, in the dark, in total silence. And it will be bliss.”