A FATHER and son tossing a ball back and forth are the most basic bitches in the park, onlookers have agreed.

The pair’s faltering conversation and failure to come up with any activity other than repetitively throwing the ball has seen them judged by everyone else in the park, other parents included.

Grace Wood-Morris, aged 17, said: “Oh my God, so f**king basic. Could they be making any less effort? Tossing a ball. Well done. You have reached zero.

“Don’t look now, but the dad’s trying to bond. He’s just asked his son if he likes making model planes. This is so cringe. I have to film it, TikTok will lose its shit.”

82-year-old Mary Fisher, who walked past the pair, said: “They could at least use rackets, or bounce the ball off a tree or some shit. It’s like throwing and catching is the top level for these hos.

“Okay this is perfect, the son dropped it? And he’s sat down, like he’s exceeded his programming? And now the dad’s offering him ice-cream? And it’s f**king vanilla? These two make a vitamin advert look deep.”

Father Stephen Malley said: “We had a lovely time at the park. And now we’re going home.”

Dolls that piss, and other inexplicably popular childhood toys 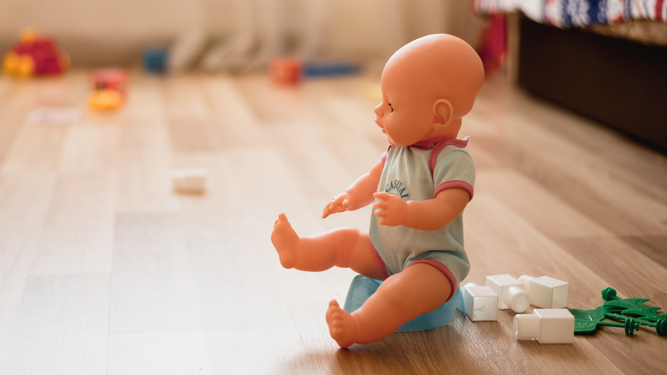 KIDS are weird, and the crap they play with is equally f**ked up. Take these five unhinged toys:

Manufacturers claimed these dolls bring out a child’s nurturing side, but the only thing kids really care about is the disgusting novelty of simulated piss. Nothing entertains a child more than making a fake baby soil itself. They know you hate it, and that’s why they love it.

These uncanny heads allow children to play hairdresser without butchering their three-year-old brother’s flowing locks, but also make it look like your feral children are playing with the remains of a decapitated innocent. Advertisers should target this morbid angle because everyone loves serial killers and it’s never too early to start.

You can forgive children from the Victorian era for thinking these were the dog’s bollocks. In an age of no telly and tuberculosis, a wooden steed rocking gently back and forth was as thrilling as Thorpe Park. Today they’re more a comforting purchase for new parents whose homes will be full of gaudy bleeping plastic shit shortly.

From Cabbage Patch Kids to Troll dolls, every generation has been enthralled by fugly-as-sin toys. It’s as if children instinctively need to feed, clothe and play with these treasured hideous monsters, then bore everyone else by talking about them endlessly. Blame the parents.

Or it could be one where a dog craps, or where a monkey pulls a finger from its arse, or popping spots. The attached game is always perfunctory bullshit, the thrill of pulling slime from a nose fades fast, the large plastic face or bum or whatever lingers in a cupboard for years.