Film to show man going to the toilet

Viewers will see retired engineer Julian Cook finish a bowl of bran flakes before picking up a copy of Practical Fishkeeping and leaving the kitchen.

The camera then follows him into the downstairs bathroom where he will be shown pulling down his trousers and underpants. A few minutes later it becomes clear that he has gone to the toilet.

But the controversial film has been attacked by church groups, TV watchdogs and anti-going to the toilet campaigners.

Bill McKay, the director of Holding It In, said: “This programme suggests that going to the toilet is somehow perfectly natural, when as a society we should be embracing the idea of holding it in for as long as possible.”

Monsignor Stephen Malley, adviser to the Christian Medical Institute, said: “Going to the toilet is a sin and I’ve no doubt Mr Cook will have a lovely time explaining himself to Satan.”

Meanwhile a spokesman for Ofcom said: “Our guidelines are very clear. You can screen a fictional portrayal of going to the toilet and make it as realistic as you want – with all the noises and the toilet paper – but you must not show someone actually going to the toilet.”

But Mr Cook’s wife Elizabeth insisted that going to the toilet is ‘part of the journey of life’.

She added: “Julian wanted to provoke a debate about the inevitability of expelling waste. He was also absolutely bursting.

“It’s his lower intestine and his bottom and, with all due respect, he should be allowed to go to the toilet whenever he wants.

“I can understand that some people might not want to see that, but they don’t have to watch.”

Blur To Remind Everyone Why They Split Up 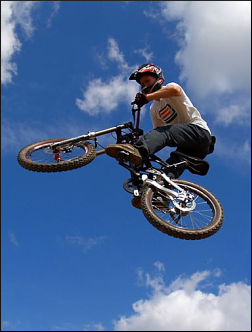 BLUR are to remind everyone why they split up at a one-off gig in London next summer.

The Brit Pop four-piece will play Hyde Park next July in return for an enormous sum of money, but may play more gigs if extra money is offered.

Singer Damon Albarn said he would use the re-union to tell his fellow band members of the enormous success he has enjoyed with his pop group Gorillaz, and to find out what exactly they had been up to while he was away.

Bassist Alex James said he hopes to raise enough money to buy a new pig, while guitarist Graham Coxon will spend the first half of the gig handing out flyers on behalf of Peter Mandelson. No-one knows who the drummer is.

Formed at some posh art school in 1989, Blur had their first limited success when they released an album written to sound exactly like whatever else was popular at the time. However, they hit the big time three year's later when Damon Albarn became a cockney.