THE British public have become familiar with American put-downs, but do they do the job as well their British alternatives? Let’s find out.

Are Americans referring to the bottom, ie. the part of the body which emits shit, or a type of donkey? It’s unclear, and asses – the four-legged kind – are useful and carried Jesus many a time. The British ‘arse’ is unambiguous and better for it. Try to ignore the fact that you’re effectively saying ‘Don’t be a bottom’, because that would make you an arse.

‘You’re a real jerk’ vs ‘You’re an utter wanker’

What sort of insult is this? You sound like 1970s sitcom wanker The Fonz. Also the biting element is weird, suggesting Hannibal Lecter gruesomely gnawing that cop’s face off, which is surely not the conversational territory you were aiming for. Or it suggests a playful nibble, and an insult should never give the receiver an opportunity to counter with a witty Wildean riposte like ‘Why, are you gay?’ The British ‘I couldn’t give a f**k’ has none of these problems.

‘What a total dipshit/dillhole/dickwad’ vs ‘What a massive twat’

Calling someone a portmanteau of non-offensive words will only raise curiosity as to what a dillhole is. It might stun them into silence as they wonder if American have a special cavity in their kitchens for the storage of dill. But generally avoid wishy-washy slurs from across the pond and instead use the tried and tested ‘massive twat’ to guarantee offence.

Dismissing someone with the phrases ‘go figure’, or ‘you do the math’ makes you sound like a character from The Big Bang Theory, or worse still, Blossom. To promptly get rid of someone deliver the classic British ‘Just f**k right off’ and avoid the suggestion that you’re still, weirdly, doing homework.

'It's fine, honestly' and other insulting ways to describe penis length 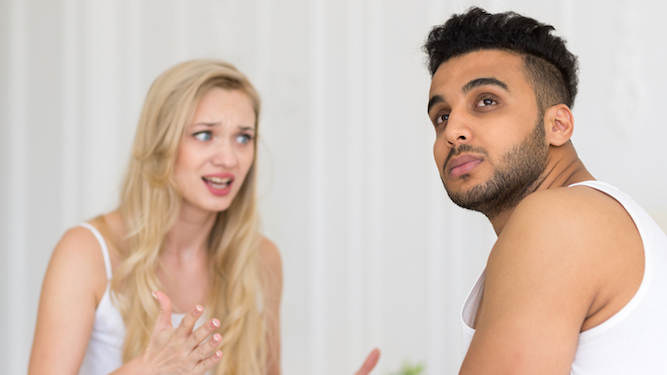 NEED to describe the length of a man’s package for some reason? Avoid these phrases unless you want to hurt his feelings.

As if the passive aggressive f-word wasn’t enough, chucking in the word ‘honestly’ is sure to emasculate any bloke. If you were really being honest you’d say it’s slightly smaller than average but their personality makes up for it. Which are words no man ever wants to hear and you may as well just lop it off with some garden shears.

Nobody has ever believed this. Even if they were presented with a massive peer-reviewed scientific research paper which proved it to be true, not a single man on the planet would trust the findings. If you say ‘size doesn’t matter’ to a man their brain will translate the words to ‘Wow, that’s a completely pointless microscopic cock’. Now that’s a scientific fact.

Perfect for what though? Impersonating a cocktail sausage? Be more specific unless you want a man to develop a complex. You’d think ‘It’s perfect for satisfying my sexual needs’ would do the trick. Only it won’t. Blokes need to imagine they have some sort of giant prehistoric snake down there.

‘It’s a grower not a shower’

What you’re really saying here is that a man’s tackle is actually quite tiny in its flaccid state. Even if their member swells up to an impressive length when excited, most men will not find this adequate compensation. Ideally they would like to be swinging something resembling a sausage dog draught excluder between their legs at all times.

‘Wow, it’s even bigger than my ex’s, which was really large’

This has all the hallmarks of an excellent phallic compliment. You sound impressed, and you even compared it favourably to the penis of an ex-partner. But then you had to go and ruin it by using the words ‘really large’. You should have said ‘enormous’, ‘gargantuan’ or ‘the biggest in the world’, or ideally all three. But now you know for next time.