BRITAIN’S fictional immigration crisis is at an end thanks to Brexit, so what will Middle Englanders raise their blood pressure about now? Try these:

You could spend weeks searching for a gender-neutral loo in most of the country, so now’s the time to claim Gents and Ladies toilets are being outlawed and innocent children must defecate next to burly, bearded men in frocks. Ignore the clash with your belief that Britain is in the grip of Sharia law.

The coronavirus is here and it’s an absolute outrage that you can’t buy a years’ supply of face masks for you and your family. Why hasn’t the government been stockpiling them? Why is the NHS once again letting you, who isn’t ill, down?

The tiny Nordic eco-warrior’s relentless crusade to return the world to the Middle Ages will inevitably end in the banning of all cars, buses and even ambulances from British roads within the next 18 months. Need to get to hospital urgently? Sorry, Greta says you’ll have to walk.

Not content with poisoning Prince Harry’s mind against his family and his beloved British tabloids, scheming Markle is plotting to kill her way to the throne using voodoo dolls, occultism, a witch doctor and other racist stereotypes.

The mere fact that Subway is doing a vegan sandwich means that we have only months to stop veganism becoming law. You can only fight this by continuing to eat meat which is freely available everywhere, just as you already do. 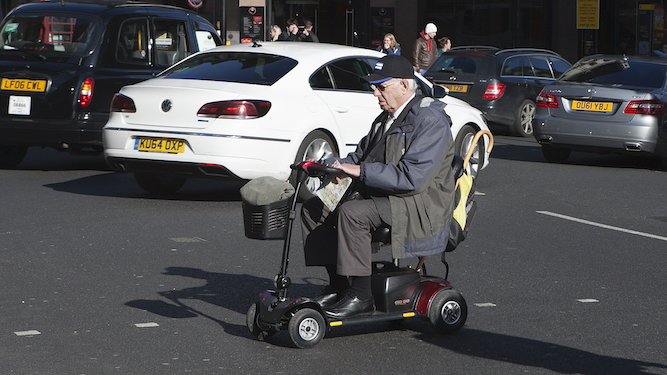 A PENSIONER on a mobility scooter has confirmed that riding it around town is just as cool and kick-ass as it appears.

Norman Steele, aged 74, was bought the scooter by his children after a knee operation and now believes his local shopping precinct to be the post-nuclear outback and himself to be a geriatric Mad Max.

“Sure, it only goes eight miles per hour, but you’ll be surprised how fast that seems when you aim it at a gang of pavement-blocking students. They are.

“Technically that’s not street legal, but the filth can’t touch me. Know what else? No such crime as drink-driving on this motherf**ker. Oh yeah. Can’t even be breathalysed.

“You should see the faces when I drive it straight into the post office. Everyone’s all ‘No way, he can’t do that’, then they see me grin and they’re all ‘Well sh*t, I guess he can.’

“Now get out of my way, ars*holes. I’ve got a pension to collect.”