Five mildly embarrassing incidents that will torture you forever

THE major screw-ups in your life can be healed with time and therapy, but these relatively minor embarrassments will haunt you until your dying day:

You were ten. You meant to say ‘Miss’ but tripped up and called your teacher ‘mum’ instead. A simple mistake, especially considering both words start with the same letter and you were a child, but if you had a time machine it would be the one thing you’d go back and fix. Even assassinating Hitler is a lower priority.

We all take the risk, and it was only a little one, but it turned out to be not only unignorably audible but memorably pungent. You still wake up thinking about it most hangovers. What made it worse was that nobody mentioned it, not to your face, but you know your uncontrollable flatulence is still a running gag in WhatsApp groups.

The door manufacturers tried to help by writing ‘pull’ on the handle in massive letters, yet cocksure you ignored it and persisted in giving a solid shove. Because you were trying to impress a hot date, so your inability to read a simple instruction cost you the love of your life and your self-respect.

Saying ‘you too’ inappropriately

It’s usually fine to say ‘you too’ at the end of a conversation when someone’s saying it was good to see you or whatever. But you blurted it out when your friend said ‘bless you’ after you sneezed. The confusion and disappointment on their face has been seared into your memory ever since. The friendship never recovered.

There are loads of ways to mess up a handshake and somehow you managed all of them at once. Your palms were sweaty, you opened limp then overcompensated by crushing the other guy’s fingers, and to top it off it lasted for a solid minute. If it wasn’t so mortifying it would be impressive.

Six routinely bullshit things that happen in every movie 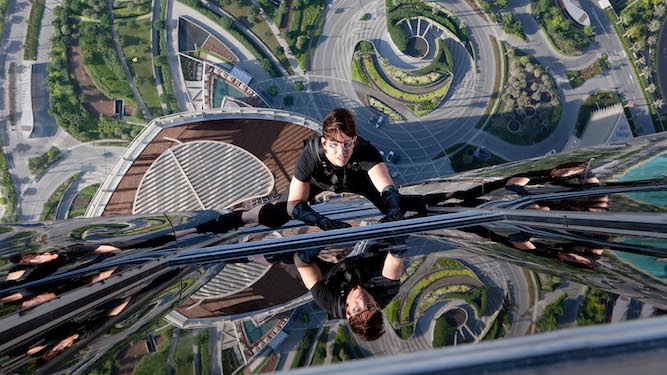 COULD Tom Cruise scale the Burj Khalifa wearing digital gloves? Of course he f**king couldn’t, but it’s no less believable than these things we simply accept:

Every criminal or unjustly accused fugitive who holes up in a motel flicks on the TV to find it’s displaying a news report about them. And do they watch it, hoping to find out what leads the police have to evade them for longer? No. The dickheads turn it straight off.

Nobody in a movie nightclub has to raise their voice, let alone drunkenly shout directly into someone’s ear while the other person pretends to hear what they’ve said, laughs, nods their head then sips their drink awkwardly while avoiding eye contact in case it was a question.

How do you end a phone call? By saying ‘bye’ repeatedly, yeah? Even a conversation with an anonymous call centre operative ends politely, unlike any movie conversation which ends with the caller hanging up the moment they’ve finished talking. It’s an approach that could pay real dividends in life, especially when your mum phones.

No-one ever has to hunt for a parking space. They pull into a handy space right outside their destination, and no-one ever gets given a ticket either. The Fast and Furious films should be 90 per cent Vin Diesel circling the block saying ‘Are they going back to the car? Shit, that Kia’s got in before us.’

The protagonist makes a last-minute dash to his true love, and she opens the door and looks great. The hero’s been living in a shack in the woods for six years and he looks Hoxton-ready. Even when near-death, nobody looks as terrible as you do on an average weekday morning.