Friday the 13th still luckier than any Monday

FRIDAY the 13th, supposedly the unluckiest day in the calendar, remains some distance better than any Monday according to researchers.

The day’s reputation for accidents, misfortune or being slaughtered by a man wearing a hockey mask or his mother is justified but easily shrugged off because there is no work the following day.

Professor Henry Brubaker, of the Institute for Studies, said: “We analysed the data and the chance of breaking a limb, losing your cashcard or leaving the office only to see your car suddenly vanish into a sinkhole is, indeed, up to eighty times higher than normal.

“However, we also found that any suffering was still nowhere near as bad as the unbearable psychological pain of finishing a full day’s work and there still being four more days to go.”

Solicitor Tom Logan said: “I left the house this morning, stepped on a stray rollerskate, skidded into an open manhole cover and looked up, dazed, only to see a grand piano falling onto my already-broken body.

“It’s a catalogue of terrible misfortune, but being in a full-body cast means no work until June and the lads are bringing a few cans to the hospital later tonight. 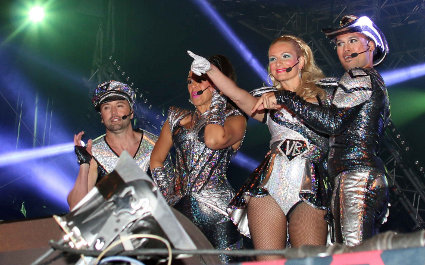 LABOUR is to deploy the famous Vengabus to capture the crucial youth vote in marginal constituencies.

The brightly-coloured Vengabus, blaring dance music and handing out cocktails, has promised thousands of drunken revelers that there will be an economic boom boom boom boom if they vote Labour into their room.

Wayne Hayes of Burnley said: “I staggered out of the nightclub and there they were, the Vengaboys returned to lead us to Ibiza just like the legends foretold.

“They told me that the Labour party is the party that likes to party, an intercity disco from Newcastle to Padstow.

“They’ve only got a bus now, but if we all vote Labour then Venga Airways will fly me far away from this big town and the rain to a party in the Mediterranean sea.”

But a Tory spokesman said: “Take a closer look at those Vengaboys.

“Behind the dry ice and the lasers that’s Diane Abbott and Hilary Benn painted orange and pretending to be Dutch.