YOUR friend’s new flat is nice, for London.

The former council property, which is a 24 minute walk from a Zone 5 tube station, is pleasant in terms of what is considered acceptable to Londoners who are not foreign millionaires.

The friend said: “Obviously it wasn’t cheap but it is London, and so to get a bed-sitting room, bathroom and a hallway is a real coup. Also there’s a window directly overlooking a stranger’s window.

“I mean you just don’t find that in London, not on a normal person’s budget. Forty other people put in sealed bids, I had to bribe the estate agent with cocaine and high quality chocolates.”

The flat’s other features include a lift that smells more strongly of piss than piss itself, and thin walls through which the neighbours can be heard at all times.

Your friend added: “Most people in London have got shitter flats than this.

“It’s fairly safe around here. I checked the murder rate online and it’s not one of the worst ones, for London. 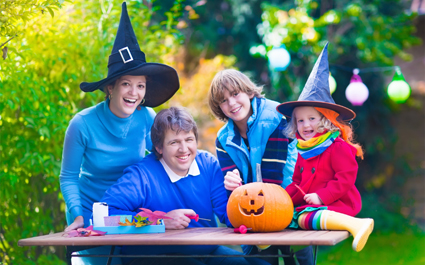 A NICE family is going to ludicrous lengths to ensure Halloween is safe, healthy and educational.

Donna and Clive Sheridan plan to expand their children’s knowledge of ancient traditions while keeping them safe from threats including paedophiles and childhood obesity.

Teacher Donna said: “We’re allowing the children to go trick-or-treating on the condition that we go with them to enforce our agreed three-sweets-only limit.

“There’s been a family meeting about costumes, during which it was decided that our teenage daughter will not be allowed to buy a ‘demon nurse’ outfit and will be going as a druid high priestess instead.

“We don’t want to contribute to the child obesity epidemic, so I’ve made a fruit platter for any trick-or-treaters who come to our house. I’m sure they’ll prefer a tasty lychee to horrible mass-produced milk chocolate.

“My husband Clive has been reading up on Halloween, so throughout the evening he will be sharing interesting facts with us, such as Halloween’s possible origins in the Gaelic festival of Samhain.”

Other preparations have included the purchase of safe, battery-powered Halloween lanterns and a rule that ‘tricks’ will be restricted to saying ‘Woo, woo, the ghosts will get you’ from the top of people’s driveways.