Friends suspect man may be lying about the North

SOUTHERN friends of a man from the North suspect he is lying about how gritty yet welcoming the region is, they have revealed.

Data inputter Tom Logan, now based in Croydon, depicts the North as a community-spirited utopia populated by unpretentious, friendly people who are also dead hard.

Co-worker Donna Sheridan said: “We were in a pub when some students started being a bit loud and annoying and Tom said, ‘If you did that up North you’d get a smack in the gob.’

“Is that true? Do Northerners instantly attack anyone who annoys them? If they’re constantly battering each other at the slightest provocation it’s not surprising all their factories shut down.

“He claims Northerners do kind things like taking a massive hotpot to their neighbours if they’re skint. But surely they might find this incredibly patronising?

“I’m starting to think Tom’s making this shit up. I went to Leeds recently and I definitely saw people drinking lager instead of bitter without calling each other ‘soft Northern poofs’.”

Logan said: “Everything I have said about the North is true, including my frequent trips to the Hacienda and my yearning for pie and chips, which are made to a superior recipe outside the South.

“There’s no way I’d make things up because I’m actually from a nice part of Cheshire and I desperately want some Northern hardman kudos.”

A fascinating glimpse inside the Queen’s private sitting room 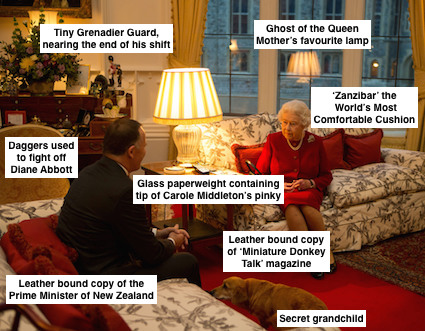