THE inhabitants of Newcastle have reminded Northerners that they are soft Southerners who wear coats in winter and know about pesto.

Newcastle’s observations throw into doubt decades of boasting by Yorkshire and Lancashire that their cities are the last word in grit, grimness and crap weather.

Leading geordie Roy Hobbs said: “Sorry to shatter your illusions but you’re 150 miles from the proper North. You may as well be having ballet lessons in Cheltenham.

“You think your accents are coarse and incomprehensible? Bollocks. You could be reading the news on Radio 4. Not like us, who sound as if we’re trying to swallow mugs of hot tar while we’re talking.

“Our industries collapsed before yours did, our whippets are thinner than yours and we’ve got weirder unhealthy things in our chip shops, like eggs deep-fried in cheese.”

Hobbs confirmed that a recent drop in temperatures to below zero meant he would be dispensing with his winter t-shirt and going bare-chested to avoid feeling “hot and sticky”.

He added: “We are Newcastle, and we are the ultimate North. Well, apart from Scotland, who we’re a bit scared of.”

How to have a gammon Christmas 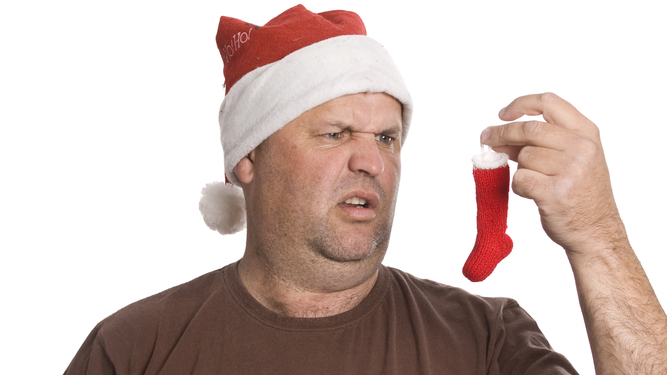 CHRISTMAS is a time for being bloody angry and having political correctness rammed down your throat. Here’s how to have a furious Little Englander Christmas.

Make up things to get angry about

They’re probably going to ban turkey in case it offends people from Turkey, right? Well, no, that would be ridiculous. But don’t let it stop you getting annoyed about it.

Let your imagination roam free and invent terrible things the EU and ‘PC brigade’ plan to do to Christmas as if they were real, eg. diversity quotas for Santa’s elves.

Watch Doctor Who purely so you can vent

You know Doctor Who is pretty right-on these days, so make sure you watch every second of this sickening travesty. Don’t enjoy getting angry too much and punch the screen in, because The Dam Busters is bound to be on at some point.

Gammons love ranting, so make a schedule, eg. ’23 December: Tell that idiot Charlotte to get her head out of her fucking arse about the federal European superstate. Remember to wrap her Elsa doll.’

If it snows, build a snowman in the shape of a golliwog, spray paint it black, post the images on Facebook and wonder why you’ve suddenly lost your job.

If you’ve recorded lots of episodes of Question Time on your Sky box you’ve basically got a huge box set similar to the The Walking Dead but starring wankers such as Farage and Isabel Oakeshott.

Get snuggled up under the duvet and enjoy your favourite classic episodes, like the one where a Labour MP is unconvincingly trying to be pro- and anti-immigration at the same time.

However much you’ve enjoyed a gammon Christmas, it’s important to reduce your blood pressure. Eat more salads and only rant about ‘snowflakes’ twice a day.