GIRLY crime was up by more than 50% last year, including a sharp rise in thefts of those darling little Mini Cooper convertibles.

New figures also showed an increase in the amount of cannabis being grown as a decorative pot plant, while supermarkets reported a rise in thefts of salad, frozen yoghurt and Philadelphia 'Light'.

There has also been a 25% increase in breaking and entering, sweeping up the broken glass and leaving an apologetic note.

Superintendent Tom Logan said: "Girly crimes of violence have become more acute, especially going up to someone and flapping your arms wildly while closing your eyes and turning your head to one side.

"But we are getting better at apprehending girly shoplifters, mainly because it takes them 45 minutes to decide what to steal followed by 30 seconds of excessive flouncing."

Supt Logan said further training was necessary to deal with girly crime suspects, adding: "The whole thing can get a bit tearful, especially when you actually charge them.

"They're allowed to bring a friend to the station and we've set up a nice, comfy room, with a really lovely beige sofa, some magazines and a decent range of Cadbury's Options."

Government To Give Your Neighbour's House To Junkies 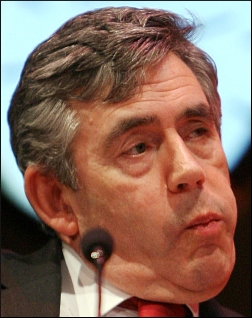 THE government is to use your money to buy your neighbour's house and give it to a gang of junkies, the prime minister announced yesterday.

Unveiling the the £200 million Ruin Your Neighbourhood Fund, Jim Callaghan said: "If the house next door to you is lying empty, it is only right that the government should buy it and give it to people who live in their own waste.

"Junkies are finding it increasingly difficult to get onto the housing ladder as they deal with the combined pressures of taking crack, swearing at each other as loudly as they can and throwing their rubbish over the garden fence.

"And without a decent roof over their heads junkie children end up vandalising cars, throwing knives at each other and having sex with anything that moves. Now they will be able to do all this to you."

He added: "And because we are in charge of the money, it is inevitable this policy will be more likely to impact in areas with Conservative Members of Parliament."

"So the message is clear: Vote Tory and you'll be living next door to someone who will molest your cat and go to the toilet in your driveway."