MINISTERS were yesterday forced to withdraw a new report which showed crime falling across the country, after realising it was Danish.

A Home Office spokesman said: "So I'm looking at it and I'm thinking 'vandalism down, robbery down, violence down – that doesn't sound like Britain'.

"Then I noticed the section on herring theft and I thought 'hang on, this is Denmark'.

"I said to Jeff, I said, 'Jeff, someone's only gone and released the Danish crime figures' and he said it was just like when he worked over at health when they'd chuck in some French stuff to make it less grim."

He added: "On reflection, I suppose I should have guessed from the title, 'Crime: A Smørgasbørd of Statistics'.

"Sure enough, it had figures for raping and pillaging, king poisoning, pig theft and frauds committed while using impeccable English.

"Did you know that raping and pillaging is down 22% in Jutland alone, while they haven't had a case of king poisoning at Elsinore since 1956?"

The spokesman said: "Having read the report I do like the sound of Denmark, although I presume their crime figures are complete bullshit too." 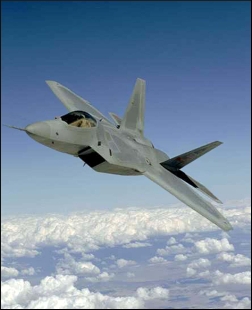 THE new F22 Raptor stealth fighter can now store up to 25,000 songs and features a class leading 6.2 megapixel camera, built-in.

Battery life on the $400 million attack aircraft has been improved to give nearly eight hours talk time and it now has Bluetooth connectivity and an easy to use QWERTY keyboard.

Despite this Which? Mobile gave the Raptor just three-and-a-half stars, branding it poor value compared to the Samsung U600 or the LG Viewty.

Carl Hayes, editor, said: “We like the stealth mode so you can take it on the train without anyone noticing. It also makes it harder to steal.

“And we loved the pop-up 20mm rotating canon, which means if anyone does complain you can quickly reduce them to a pile of little bits and return to your magazine.

“But why no video mode or zoom capability? And why only 480 rounds for the cannon and just two, small-diameter laser-guied bombs?”

Hayes said he did expect other manufacturers to copy the Raptor’s turbofan thrust vectoring system which allows it to hover vertically in mid-air while recharging.

He added: “There are cheaper phones on the market, and it’s email interface is no match for the BlackBerry Curve, but it does the job if what you want is basic photos, music storage and to destroy entire villages full of brown people.”