Guardian reader secretly loving all this

A GUARDIAN reader is secretly enjoying being even more earnest than usual because of Brexit.

44-year-old Tom Booker, from Hackney, has been indulging his emotions since the referendum and is planning to spend the weekend at a special yoga and meditation retreat to process his feelings about the EU.

He said: “The emotional impact has been very severe and I have these bouts of crippling sadness where I need a lot of attention.

“I’ve actually had a couple of days off work sick, because I need to spend some time just mooning around in bike-themed cafes drinking single estate coffee.

“It’s actually been toughest on my wife, because I’m too upset to unload the dishwasher or do other basic household chores.”

Booker is concerned that leaving the EU could affect his work doing some bullshit freelance thing and make Apple products more expensive.

“I need to get a new MacBook Pro because it’s the best computer for looking at YouTube clean-eating cookery videos, but I’m worried that Boris will make everyone have chunky PCs because he doesn’t appreciate good design.

“It’s all terrible, thank god for the new reggae-influenced post-punk band I’ve discovered that you wouldn’t have heard of yet.” 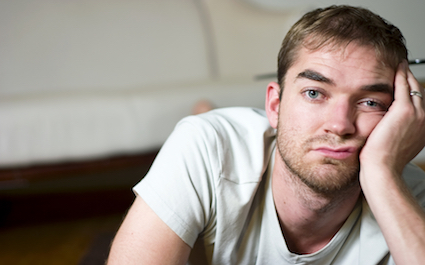 A MAN who claims he has been ignored by politicians is actually a lazy dipshit who just likes complaining, it has emerged.

Retail worker Martin Bishop superficially appears to have a legitimate grievance, but in reality is an ignorant sod who makes things up so he can rant about them.

Co-worker Tom Logan said: “Martin says politicians never listen to people like him, but that might be a good thing because he talks shit, like today when he said Britain is 85 per cent Muslim now.

“Once I asked if he’d ever tried contacting our local MP. He said there wasn’t any point because they’re too busy shagging high-class prostitutes in their ivory tower, which he thinks is an actual building.

“Also our MP is a 62-year-old former union rep called Sandra who holds a weekly surgery at the civic centre and campaigns for better disabled access, so I can’t really picture that somehow.

“I’d take Martin’s opinions about politicians more seriously if he wasn’t so badly informed about everything else, but this is a guy who thinks humans ‘defeated’ the dinosaurs.”

Bishop said: “Politicians think ordinary people like me are idiots, but what d’you expect when it’s all about who you bummed at Oxbridge?

“I could teach them a thing or two about the real world, like how to complete Call of Duty on Veteran mode.”