A LOCAL hard person with a moustache has aggressively confirmed that he has never heard of Movember.

41-year-old Wayne Hayes was approached in a Somerset pub by tourist Tom Booker, who asked how much money he’d raised.

Bridgwater-based Hayes, who works in a quarry and has a fight at least once a fortnight, replied: “I don’t know what the fuck you’re on about mate.”

Booker then explained that Movember is an annual thing where people grow facial hair for charity. Hayes, who has had a moustache since he was 14, quickly became angry.

He said: “You don’t come in here chopsing off unless you want a slap. If you’ve got some sort of problem let’s talk about it outside.

Booker then returned to his seat and left the pub shortly afterwards. He said: “I also really liked his stonewashed denim jacket, I was going to ask him if he got it from a vintage shop. I’m not going to do that now though.”

Professor Henry Brubaker of the Institute for Studies said: “Men under 50 who have moustaches for reasons other than fashion or fund-raising are all hard. Often they are quite small and wiry but they could very easily kick your head in.”

Corbyn and the Queen discover they are both into The Jam 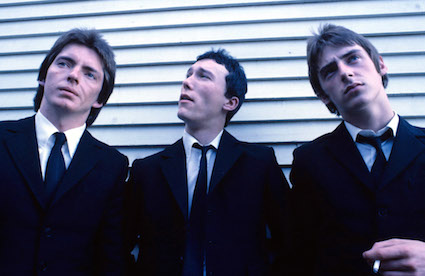 ALL tensions between Jeremy Corbyn and the Queen have been resolved with the discovery they are both massive fans of The Jam.

After meeting the Labour leader yesterday, the Queen said: “Straight away we were discussing our favourite tracks and asking each other if we’d seen them live.

“Whatever differences we may have had don’t matter now, given our shared love of the seminal 1978 album All Mod Cons.”

The Queen added: “I have to admit I was a bit wary of Jeremy and his desire to abolish the monarchy, but if he’s into The Jam he must be alright. Who knows, maybe he’s got a point?”

Corbyn said: “If you’d asked me beforehand to predict the Queen’s favourite Jam song I’d probably have said  Down in the Tube Station at Midnight, simply because she’s mentioned in the lyrics. But it’s actually English Rose, which I think is rather lovely.

“She is the English Rose and long may she reign over us.”

Corbyn and the Queen now plan to attend a mod all-nighter in Brighton, travelling on the Labour leader’s heavily modified Vespa.