BRITAIN is reining in its spending by wasting money on cheaper crap.

Unable to afford big-ticket items they do not need, cost conscious consumers are instead investing in smaller bits of uselessness.

In the run up to Christmas shops are reporting a sharp fall in sales of telephones that also take photographs and high definition televisions that show awful programmes.

Emma Hollis, from Ipswich, said she could no longer afford Christian Louboutin shoes but would still treat herself to a 'Mr Frothy' coffee frother and a Franklin Mint plate depicting the cast of Ocean's 13.

She added: "I've got £30,000 of credit card debt and a mortgage I cannot pay, but what I don't have is an ice cream maker with big, happy feet."

Charlie Reeves, of Bristol, said he would now be forced to keep his latest television for an extra six months but does have his eye on a remote control teapot and a pencil sharpener that also takes photographs.

He added: "I have thought about putting some money in a savings account, but then I got all depressed and bought myself a pair of chocolate thumbs."

Ross And Brand To Dig Up Queen Mother 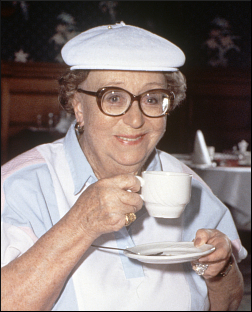 RUSSELL Brand and Jonathan Ross are to team up with the corpse of Queen Elizabeth, the Queen Mother for a new prime-time show.

In the first installment, to be screened on Christmas Eve, Ross and Brand will travel to Windsor where they will remove the remains of their co-star from her tomb in St George's Chapel.

They will then race back to London where the Queen Mother will be transformed into an elaborate marionette which Brand and Ross will manipulate via remote control.

Brand will provide the voice of the dead Queen, but has yet to decide between a suitably respectful high-pitched squeak or the deep-throated growl of an obscene Frenchman.

The producers are also planning a big-budget finale featuring the late Queen singing a medley from Guys and Dolls with whatever is left of the cast of Dad's Army.

"I look forward to threatening you all with jail in order to pay their multi-million pound salaries."