After a fortnight of mixed-age and ability learning with her children, Lucy Parry has blown the whistle on the bad educational practices taking place within her kitchen.

She said: “After two miserable weeks I felt I had no choice. The time has come for this homeschool to enter special measures.

“It’s declined significantly since the last lockdown, when there was much more school spirit and I could send them out to run round the garden shrieking for two hours and call it double PE.

“The standard of education is frankly lamentable, and frequently after lunch there’s the unmistakable odour of alcohol on the teacher’s breath. That’s a safeguarding issue and a sackable offence.

“Ofsted need to come in as a matter of urgency, rate the school inadequate, take us into special measures and parachute in one of those inner-city headteachers who’ll discipline the kids while firing them up with a love of learning.

“Then I can sit at the back of the class on my phone ignoring it all, like in real school.”

The QAnon supporter's guide to pretending it's not all bollocks 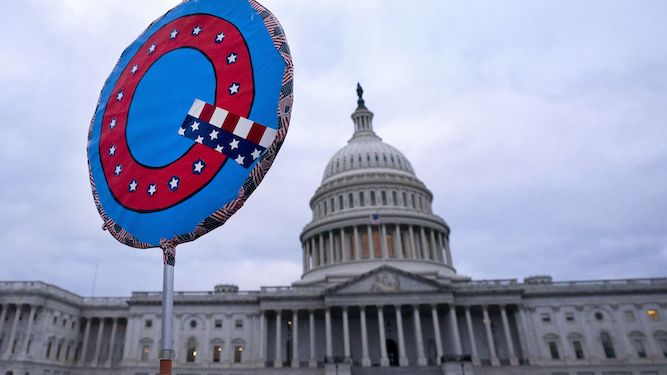 This is a cunning tactical retreat

Trump cannot take down the liberal paedo-vampires in a high-profile role like president, even though that’s exactly what you’ve been claiming for six months. He needs to slip into the shadows like a bucket-gutted ninja and operate secretly. Makes f**k all sense, but what else is new?

Trump is being hunted down by Tom Hanks

Beloved Hollywood actor? No, the CIA’s top assassin. He’s hunting Trump down, but the Donald is just biding his time until he finishes Hanks in hand-to-hand combat.

The deep state rigged the election

The deep state is too powerful even for a morally pure hero like Trump. If Hillary was prepared to blow up Challenger and stage 9/11, stealing an election is nothing. Be sure to mention the Rothschilds while gibbering on. Other QAnons will know what you mean.

JFK Jr needs to be protected

John F Kennedy Jr. is in deep cover in Pennsylvania. Exactly why a privileged lawyer and former magazine owner is so important to QAnon is unclear, but he’s to be commended for fighting for justice while irrefutably dead.

With interdimensional travel and mind control technology, aliens are a tough opponent even for Trump. Ever seen Joe Biden dislocate his jaw to eat a whole rat? That happened, live on camera during the debates, but they’ve covered it up.

Trump and Melania are so deeply in love he cannot risk his trophy-wife soulmate being harmed. Donald would have aced the election and declared a thousand-year dictatorship if he wasn’t such a kind, devoted husband.