How to be a dick and leave a voice message

WANT to end a friendship by leaving a voice message? Do it in the most irritating way possible:

When it comes to the number of minutes, you’re aiming for double figures. Although go further as you build up stamina. Ideally you want the recipient to let out a yelp of horror when they glance at the runtime of your message, or mistake the number for the time if they receive it in the afternoon.

If you’re going to be succinct you may as well send a text. To make the most of the voice message form, lean in and express every dumb idea your meandering brain has to offer. If you lose your train of thought? All the better. Your listener will cherish your stream-of-consciousness until you get back on track.

If the person you’re blaring at replies to your slew of monologues with a text, always respond vocally. Especially if they’re asking an urgent question like ‘I’m locked out, can you let me in?’ or ‘can you please call the fire brigade?’ Hearing your dulcet tones as you waffle on about something completely unrelated will calm them down.

You’re free to bail out of a message that gets interrupted, but that doesn’t mean you should. Instead, use the intrusion to pad out a lengthy voice message even further. This gives you an excuse to follow up with multiple, rambling apologies for wasting their time, or you could go one better by describing your interaction with a barista in mind-numbing detail.

Keep your foot on the pedal

Leaving one voice message is irritating enough. But for maximum damage send eight in a row, each longer and more pointless than the last. Then, when they’ve worked their way through the backlog, finish them off with one final speech about your personal tax return or your uninformed opinions about NATO.

Why limit your dickishness to the recipient when you could piss off a few strangers while recording your message? Experiment with blathering away loudly as you queue at the supermarket, or during the full length of your train journey in the quiet carriage. Your irksome monologue won’t pause for breath because you won’t let another person speak.

Sitting in the front seat of a taxi, and other mysterious life rules you should never break 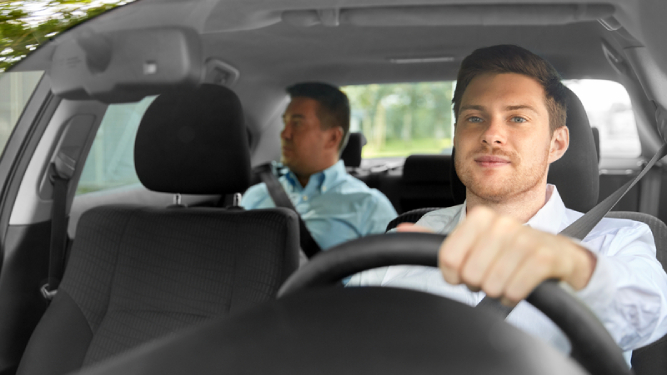 OUR lives are full of unspoken but universally observed rules that must never be broken. Only the wilfully lawless would dare contravene these:

Never sit in the front seat of a taxi

Unless you’re so freakishly tall that you need the extra legroom, sitting in the front seat of a taxi marks you out as a lunatic. Sitting in the back is mandatory, as is asking the driver ‘Having a good day?’ and ‘What time are you on until?’ For total compliance, say ‘anywhere along here’s fine’ when you’re nowhere near your destination.

It is a truth universally acknowledged that the bill for a meal must be split fairly, regardless of whether you only had a bowl of chips and a glass of water. The upside of this is that you might as well order the lobster, as it’s going to work out about the same price anyway. Looking cheap is its own taboo.

You must do everything in your power not to stand next to another man at a urinal, even if that means using the cubicle, which also marks you out as strange and hiding something. The trick is to embrace the absence of talk, which gives the room a deadly serious atmosphere, as if you’re monks transcribing a holy text rather than just blokes having a slash.

Never, ever use someone else’s work mug

Your colleagues would genuinely rather you shagged their partner than used their work mug, so don’t be tempted to chance it. Like Kathy Bates in Misery they will know what you’ve done because you put it back in the cupboard at the wrong angle, and they’ll also want to hobble you with a sledgehammer.

People are told that communication is key to a healthy relationship, but not the ultimate communication of asking your partner what’s going on in their mind. This particular question marks you out as needy, intrusive and pathetic, and will result in you being rapidly dumped. They’re probably only thinking about what to eat next anyway.