How to endure being stuck behind a slow walker

TRYING to get somewhere? Stuck a human cosplaying as a tortoise? Survive the ordeal with these tips:

Deal with the problem by taking action. Instead of trudging behind a slow walker, put an end to your misery by nipping past them while muttering ‘f**ksake’. Unless, like most of their kind, they’ve honed their instincts and somehow manage to take up the entire pavement.

Take this opportunity to put yourself in a slow walker’s shoes. You’ve got time. Perhaps they have aching legs, or they’re fatigued from a tough day’s work? It could be nobody’s rudely asked them to get out of the f**king way before? Explore whether the latter is true by barking those words at them yourself.

Like Gandhi and Martin Luther King, you’re suffering but must resist violent action. While it would get you somewhere in a literal sense, knocking the blocker to the ground could land you in court. The judge and jury, given their likely age, could be dodderers themselves and you’ll find yourself speedwalking in prison.

Go to your happy place

Imagining a place that makes you feel calm is the perfect way to get through harrowing situations like plodding behind a person trudging at glacial speed. Oceans and forests are popular happy places, but your dream location of the sofa in front of your telly is also acceptable. Concentrate and really try to picture the arse groove you’ve made.

It’s important to know when to admit defeat. If it doesn’t look like the slow walker is going to turn off any time soon, plot a different route that’s a mile further that you can stride along full-tilt and get there quicker. Though it’s only a matter of time until you get stuck behind another. Maybe you’re the problem? 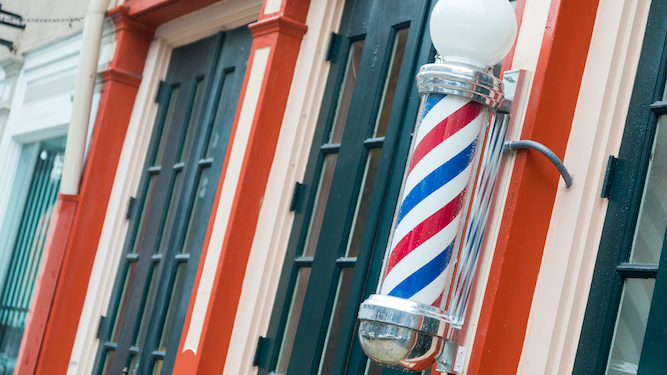 A BARBER has photos of outdated fades and awful styles in its window to attract customers.

Hair Apparent in Southampton has blown all of its marketing budget on photographs of abysmal haircuts displayed in an appealingly sun-faded window.

Owner Roy Hobbs said: “If you want to grab people’s attention you’ve got to shock them. Nobody’s going to stop and look at a picture of a sensible side parting, but a buzz cut with an intricate pattern etched into it turns heads.

“After hitting punters with big, yellowing images of a botched attempt at a Peaky Blinders, they’ll notice smaller shots of children getting a clipper run right through the middle of their head. Their morbid fascination will get them through the doors.

“Are they stock images from a Google search of ‘haircut fail’? Or evidence of actual haircuts we’ve given to clients only looking for ‘a bit off the top’? Find out by coming in for yourself.”

Tom Booker said: “All of these haircuts look shocking, where they can be made out, but this place has been open for decades so it must be good. I’m popping in tomorrow lunchtime.”