YOUR kids won’t believe you when you claim not to have had a phone at school. Here’s how to explain the strange and alien educational world you once inhabited.

You couldn’t bring your phone to class with you

It was unheard of. Well, not quite. Nathan Muir of form 4A once unplugged his green family phone from next to the umbrella stand and brought it into class, trying to find a socket to plug it into so he could call the speaking clock using the rotary dial. He was hauled out and flogged before the entire school. And this was 1987.

You had to stare into space

There was no screen to stare at while Miss Boring was droning on about rainforests in geography class. You simply had to stare at nothingness. Ask kids what vacantly staring into space is nowadays and they’ve no idea what you’re talking about. Pampered or what?

Without being able to text your mates or fiddle with games, you had to pay attention to the lesson you had been sent to school to do. You couldn’t just do something else on your phone if you got bored. It’s literally unbelievable now, but we swear to God this is absolutely true.

You had to pass notes to mates using pen and paper

Tell kids now that you used pens and paper and they’ll think you’re some sort of time traveller. Before texting, if you wanted to tell your mate who was a slag you had to write it down, the hard, honest way. Then lift a heavy piece of paper and lug it over to Trisha several feet away.

You had to judge your peers by other things

You couldn’t just decide who was worth being friends with by seeing if they had the latest phone thanks to their shallow, nouveau, status-obsessed parents. You had to do some detective work and work out who was a pov due to their flimsy sports bag off the market, super-cheap Hi-Tec trainers or hand-me-down uniform. Only then could you ostracise them cruelly.

If you wanted to bully someone, you had to physically punch them in the face

There was none of this namby-pamby psychological bullying via Snapchat. You didn’t give anyone a nosebleed with an emoticon. You had to drag them down by their big collars and give them a proper, non-virtual hiding. It was good exercise, so childhood obesity wasn’t a problem back then, and there were no monthly phone charges with hidden add-ons either! 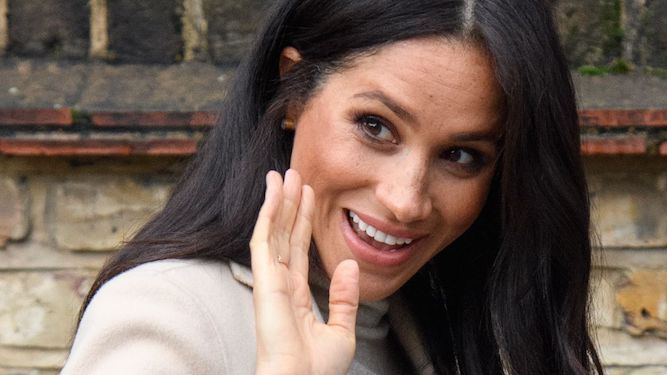 THE Duchess of Sussex has humiliated herself, the Royal Family and Britain by doing things that would have been charmingly whimsical if Kate did them.

Meghan Markle ground the good name of the Windsors into the California dirt by performing idiotic pranks for television, while if the Duchess of Cambridge performed the exact same pranks they would show what a good sport she is.

Royalist Margaret Gerving said: “Is there no low the filthy, gold-digging hussy won’t stoop to? No gutter she won’t piss in?

“Singing a stupid cat song, dancing to Buster Poindexter, drinking hot sauce from a baby bottle? I’ve never been so ashamed. Harry should be kidnapped by the SAS and made to sign divorce papers at gunpoint.

“But if alluring, winsome Kate had gleefully taken part in these pranks I would have been chuckling with delight at what a breath of fresh air she is, just what the Royals need.

“Even the Queen would have loved seeing Kate gamely dancing on the LA streets, modernising the institution of monarchy with such natural grace. Instead that cavorting attention-seeker has disgraced us all.”

American Sophie Rodriguez said: “Interesting. Because for me it proved how powerful and independent Meghan is, while if Kate had done the same it’d be shameless pandering from a white colonialist bitch.”