LEVELS of kindness and co-operation across the UK have been raised to their highest point in recent history.

Responding to events in Manchester, all types of British people have confirmed that humanity levels have been increased from ‘normal’ to ‘high’, offering free accommodation, unpaid taxi rides and other forms of selfless assistance.

“It feels as if people genuinely want to help people, which is quite the opposite of what you might think if you regularly read certain newspapers.

“This level of humanity is definitely a threat to troublemakers, extremists and right-wing journalists who think they look hard in photos with their arms folded.”

Shopkeeper Nikki Hollis said: “At ‘normal’ humanity level I think I should probably become a blood donor, but today I am going to do it.”

She added: “I think humans are actually alright.” 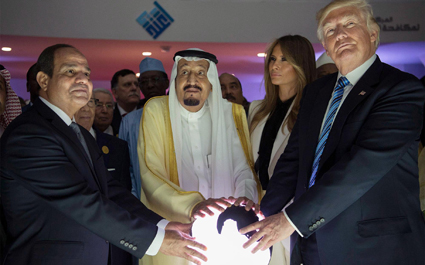 DONALD Trump has confirmed that he is a now a Muslim.

Trump said: “I only came here for an arms deal, but I had a moment when I touched this glowing ball thing that looks like an 80s special effect.

“Being a Muslim is great, very spiritual.

“I can’t wait to get stuck into the prayers. I’ve already done two today, and they were the best prayers ever. And there’s three more to go!”

As part of his plans to institute Islam as the official religion of the United States, Trump will require all laws passed in Congress to conform with what he calls ‘Sahara law’, and is to replace the stars on the American flag with crescent moons.

Trump is expected to remain a Muslim until Friday, when he is due to meet with the Dalai Lama.