Man convinced politics is bullshit despite knowing sod all about it

A MAN believes all politics is bullshit but cannot give a sensible explanation of his views, it has emerged.

Administrator Martin Bishop will not be voting in the election due to vague convictions such as all politicians being ‘tossers’.

Bishop said: “I’m not voting for politicians to sit around drinking champagne and taking bribes in the Houses of Politics.

“A guy from the Lib Dems came round and asked what exactly I thought was bullshit, so I said ‘Everything!’ and slammed the door in his face. God these people are thick.

“They’re all just in it to get money and have affairs with attractive junior politicians, they don’t care about us ordinary folk. There’s no way you can be a politician and still give a shit about anyone else.”

Colleague Nikki Hollis said: “I can understand people being cynical but Martin just told me MPs literally just buy their seats by giving millions of pounds to ‘the authorities’.

“It’s pointless discussing actual issues because he just hums the Who song Won’t Get Fooled Again as if that proves something.

“I may well punch him one of these days.” 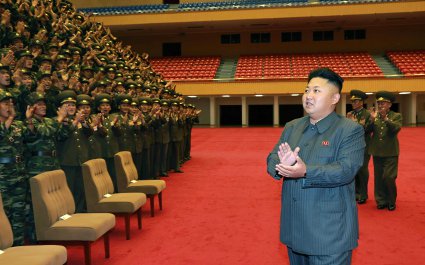 JOHN Terry’s Chelsea farewell was a bit too much pomp and ceremony, according to North Korea.

The dictator said: “Everyone should give themselves a pat on the back every now and again but you’ve got to draw the line somewhere.

“That guy’s ego is way out of control, and the people around him obviously feel pressured into kissing his arse.

“It’s a reminder that sometimes we all need to show a bit of humility.”

West said: “It’s not like he’s the greatest rapper in the history of the world. He’s not even the best centre half of the last 10 years, quite frankly.

“That guy seems a bit cocky to me, and bear in mind I say that as Kanye West.”