'I can't come to work because of the solar flare'

MILLIONS of workers will be trapped at home until Monday, because of solar activity.

Scientists said solar flares, from the sun, are reaching into homes across the country and making people very groggy, while commuters run the risk of being fried like a sausage on the bus.

Tom Logan from Hatfield, told his employer: “I just put my hand outside the front door and it was almost burnt off. I’ll send you a photo. It may not look like my hand, but it is.”

Offering to work from home, he added: “I’ll try and do some stuff by email but the flares have made my laptop all wonky.”

Emma Bradford, from Stevenage, said: “I opened the door to the postman just as one of the flares hit. He instantly turned into ash and then collapsed in a heap at my feet.

“The tragedy is I’ll never know what was in that parcel. So I should probably take a couple of days off.”

Helen Archer, from Redhill, said: “The solar flare has given me a throbbing headache and made my breath smell like day-old Pinot Grigio. This happens to me every time there are more than a dozen highly charged particles in the upper atmosphere. My gran got it too.”

Experts confirmed it was the worst natural phenomena-based absenteeism since millions were left housebound by the Attack of the 50ft Icelandic Volcanoes.

Professor Henry Brubaker, from the Institute for Studies, said: “The best way to treat solar flaring is to stay at home and watch television, though solar flares can interfere with the signal, thus leaving millions of vulnerable people completely stranded and forced to watch box-sets instead. 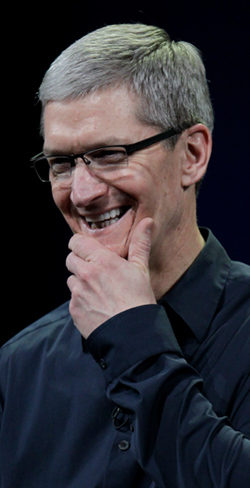 PEOPLE who want an iPad 3 must complete a series of deliberately humiliating challenges, Apple CEO Tim Cook has confirmed.

Launching the device, Cook exuded quiet evil as he explained that, while the tablet is pretty much identical to its predecessor, the real development was that the company had decided to sadistically exploit its devotees.

He said: “Potential buyers of the new machine, which is really just 4% shinier than iPad 2, will be expected to prove themselves worthy.

“Apple outlets will be transformed into extravagantly cruel assault courses. Customers are to be shaved head to foot, dipped in tanks of fluorescent de-lousing fluid and then zipped into maggot costumes.

“On assuming the role of ‘maggot’, the customer may say nothing except ‘I am a maggot and I crave only the Apple’.

“The ‘maggots’ must squirm around a series of sheepdog-style obstacles as they are kicked and stamped on by our ‘evil Geniuses’ while Benny Hill-style music plays over the store PA.

“En route to the deliberately short-shipped iPad 3 there are various tasks designed to denigrate the participant, from eating a raw sheep’s brain out of a rusty wheelbarrow to, most notably, spending 20 minutes using a Blackberry Playbook in full view of their social group.

“Their final undertaking is ‘touch the tablet’ – up to fourteen maggots compete for a single iPad, they have to stand touching it with any body part and the lucky recipient is the last one to collapse. That could go on for some days, if they need the toilet they have to soil themselves.”

He added: “Maybe Steve wouldn’t have done this. But Steve is gone now.”