ONLINE dating services are to issue guidelines on how to behave vaguely normally when meeting a potential partner.

Companies like Tinder are responding to dating app users behaving like rude, dysfunctional freaks despite apparently wanting to meet someone for a normal human relationship.

A spokesman said: “We’re trying to explain you shouldn’t do things like meeting someone and then just walking off while they’re at the bar if you don’t fancy them.

“If a date isn’t working out we’d encourage people to say something like ‘I think we’re too different’. That’s normal, unlike, ‘I expected someone more attractive. Fuck off.’

“People should also avoid starting a relationship then suddenly ignoring all contact from the other party without explanation, because that’s not dating, it’s being a sociopath.

“We don’t know why our users are such arseholes. They may think it’s a game and they’re basically collecting Pokemon they can shag.”

Dating app user Martin Bishop said: “I thought it was fine to start texting other potential partners at the dinner table after three minutes if the woman isn’t hot and gagging for sex.

“Also asking if they have any less minging friends I could go out with helps to get the conversation rolling.” 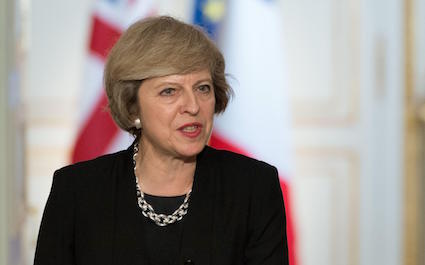 BRITAIN is to begin the considered and politically astute process of giving those sodding foreigners what for.

Prime minister Theresa May confirmed that foreigners will start getting exactly what they deserve in March, setting Britain on a path which has been taken for all the right reasons.

May said: “After careful consideration of the opinions of the cleverest 52 per cent of the population, I am convinced that sticking it to bossy Germans, arrogant French and stubbly bone idle Spanish is the best direction for our country.

“Of all the challenges facing our nation, the greatest is the existence of foreigners. I firmly believe we should focus on antagonising them, and that creating a massive bureaucratic headache is the best way to do this.

“This nation will thrive if it continues to make everyone’s lives difficult for no real reason, even if I thought that was fucking stupid a few months ago.”

Brexiter Norman Steele said: “You know that bit in Dad’s Army where Clive Dunn goes ‘They don’t like it up ‘em’.